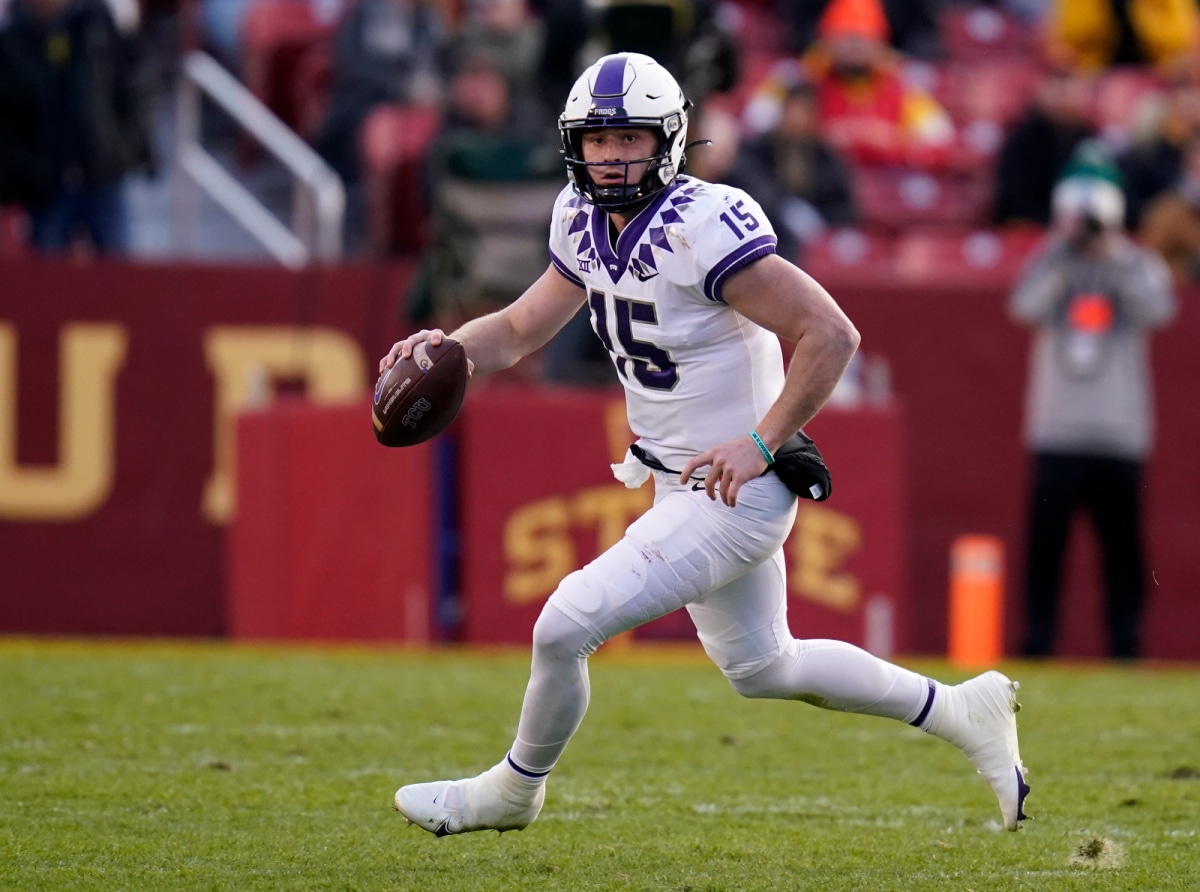 With his recovery from surgery progressing, Max Duggan preparing for competition to be TCU’s starting quarterback

Home » With his recovery from surgery progressing, Max Duggan preparing for competition to be TCU’s starting quarterback Max Duggan played half the season with a fracture in his foot that required surgery shortly after season finale at Iowa State. (The Associated Press/Charlie Neibergall).

FORT WORTH — For quarterback Max Duggan to play the final seven weeks of the 2021 season, he wasn’t allowed to do anything at practice.

No running, no simple dropbacks, no time working against the scout-team defense.

Then he received a pregame shot of painkiller on Saturdays, and go get ’em. Oh, and another injection at halftime.

And the foot still hurt.

But the mental toll of not playing would have been more painful, so Duggan got used to the needles, made his mind get used to the pain, and gutted out as much football as he could.

Any coach would want his team’s quarterback to have that kind of mettle, yet Duggan expects that the new coaching staff will stage an open competition in fall camp for the starting job. Duggan, who will be entering his senior season, will have to beat out sophomore Chandler Morris and any newcomers.

That’s the way it should be, Duggan said Wednesday afternoon from his hometown in Iowa. He’s going to be ready, too, even though he had foot surgery two days after the Horned Frogs’ season ended and as Sonny Dykes was being hired as the new coach.

Duggan is already making progress and hopes to be running when team workouts begin Monday in conjunction with the resumption of classes.

“I was on a scooter for a couple of weeks, non-weight bearing, and I was in a boot. And then just this week, I was able to take the boot off,” Duggan said. “But I’ve been doing rehab at home, strengthening it, getting it healthy, and it feels good.”

The operation on Nov. 28 showed less damage than was expected, hence the quicker recovery and the prognosis that he should be ready for the start of spring drills. The expectation is that spring practices will start a few weeks later than they did under former coach Gary Patterson.

The time leading to spring practice and the practices themselves will be vital as the Frogs install their scheme under new offensive coordinator Garrett Riley. Duggan said an advanced look at the new playbook shows a lot of similarities with recent TCU offenses under Sonny Cumbie and Doug Meacham.

Duggan said he hasn’t had all that much face time with Dykes or Riley, as he was recovering from surgery the day Dykes held his first team meeting and as the coaches immediately hit the road to catch up on recruiting.

But what meetings they had gave Duggan an idea of what to expect. One thing he gleaned is he will have to compete for a job.

“The things that they had to say, and what their expectations are, and what needs to happen here for our program is really exciting,” he said. “The new staff, they’re going to come in and are watching our film and seeing who they like and who they can play. But I think it’s going to be a competition everywhere, and I think that’s going to be good for us. They’ll bring in freshmen, they’ll bring in grad transfers, to create that competition and bring the best out of everybody.”

Duggan has started 29 games in his TCU career and is third in program history in total yards (7,353). His terrific speed and physical running style make him a ground threat, and the new offense should create opportunities for him to run.

Duggan was injured last season at Tech, a game the Frogs won 52-31. He threw only 10 passes as TCU piled up 394 rushing yards. It was costly, though, as running back Zach Evans was also injured and didn’t play the rest of the season.

Evans has entered the transfer portal, and the expectation is that he will leave the program. Duggan never considered the portal, and reaffirmed his commitment to finishing his career with the Frogs.

He believes they are close to being a winning team again, and he wants to witness it first-hand.

He’ll be back on campus Monday, possibly back to running, and intent on winning the starting job in the fall.

“I signed to be here and graduate from TCU, and that’s what I want to do,” Duggan said. “My best friends go to school here. I love the place, and all the people here.

“Obviously the last couple years, our seasons haven’t been where we want to be. I want to be here when TCU is winning, when TCU is on top, whatever my role is. Whether that’s on the sideline giving out Gatorade or snacks or it’s starting quarterback, I just want to be here and help this team win and be around the guys.”