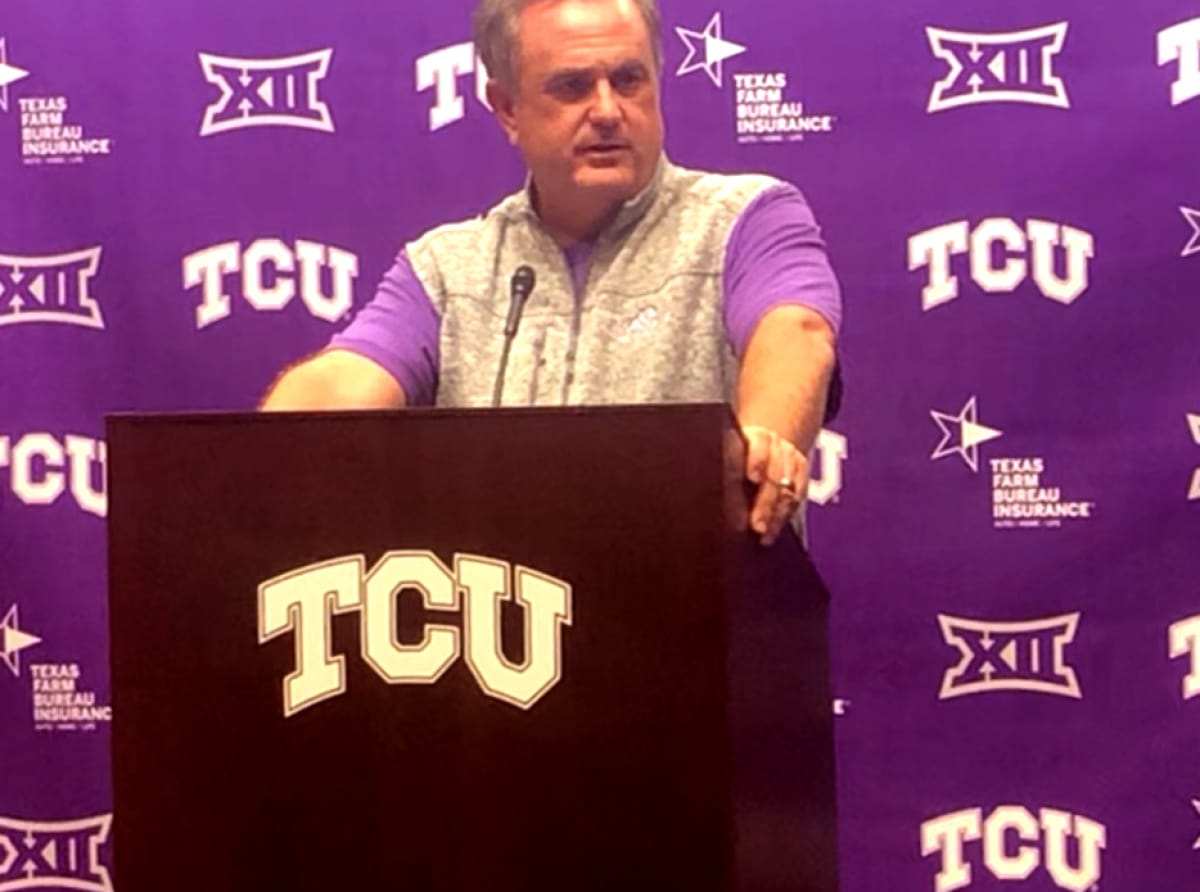 TCU recruiting class begins to take shape, but might not be complete until fall camp

By Jeff WilsonJanuary 7, 2022No Comments

Home » TCU recruiting class begins to take shape, but might not be complete until fall camp Sonny Dykes said that TCU has plans to add as many as 25 more recruits before fall camp begins (Frogs Today/Jeff Wilson).

FORT WORTH — A week has passed since the first recruits of the Sonny Dykes Era of TCU football signed their national letters of intent … all nine of them.

It’s a small class so far, but with plans to add as many as 25 more players by the traditional National Signing Day on Feb. 2 and possibly as late as the start of fall camp, Dykes said. Only a handful of them will be high-school players.

Another two dozen recruits seems like a big ask, especially with Dykes saying that he and his staff were seeking quality over quantity ahead of the early signing period. The composite average of the nine players (.8828) ranked third in the Big 12.

So, think transfer portal, which is teeming with players and will only grow once the bowl season winds down. The Frogs already have one commitment from the portal, Texas linebacker Terrence Cooks.

The word transfer isn’t as nasty as it used to be. Teams aren’t signing one-year rental players from junior colleges as frequently because of the portal. The COVID year also means transfers have more time in their new programs.

“We’ll see how that plays out,” Dykes said. “It’ll be a process. But some of those guys will be high-school guys, some will be transfers. In most cases, our guys are three- to four-year transfers. So it’s almost like adding a freshman in some ways to your roster.”

Dykes said the goal of each recruiting class is to sign a “team,” a player at each position. He also wants speedy players to fit the offense, and will need more linebackers with new defensive coordinator Joseph Gillespie running a 3-3-5 scheme.

“We’ve got some numbers that we have to address,” Dykes said. “There’s going to be a lot of things that we have to do to improve the roster. The good thing is that we’ll have a real strong opportunity to sit down over the Christmas holidays, spend a lot of time diving in and looking at our current players, watching a lot of film, trying to get an evaluation on what those guys have done in the past and also keep an eye toward the future.”

That helps explain why Dykes and his staff were up so late last Tuesday to fend off teams attempting to flip California prep Damonic Williams. At 6-foot-2 and 325 pounds, Williams was one of three defensive linemen to commit and could be a candidate to play as a true freshman.

Wide receiver Jordan Hudson is the top-rated recruit, a four-star get from Garland High School. His teammate, safety Chace Biddle, is also a four-star player. Both initially pledged to SMU but followed Dykes to the Frogs.

The lone quarterback is Josh Hoover, from Rockwall-Heath.

He might not be the last. Dykes and his staff will evaluate the current roster and see how many spots come open as TCU players enter the transfer portal. The plan is to add 25, plus or minus a few, to finish off Dykes’ first TCU recruiting class.

“We’ll have a chance starting Jan. 10 to start working with our players,” Dykes said. “We’ll be here at 6 every morning watching our guys lift and run, making determinations on who can play what and where can we move this guy and how can we best address the needs that our team needs to address when it comes to transfers.

“So all these things will play out for a long time. That number may be a little high or maybe a little low, just depending on what happens and how many spots we have on our roster.”