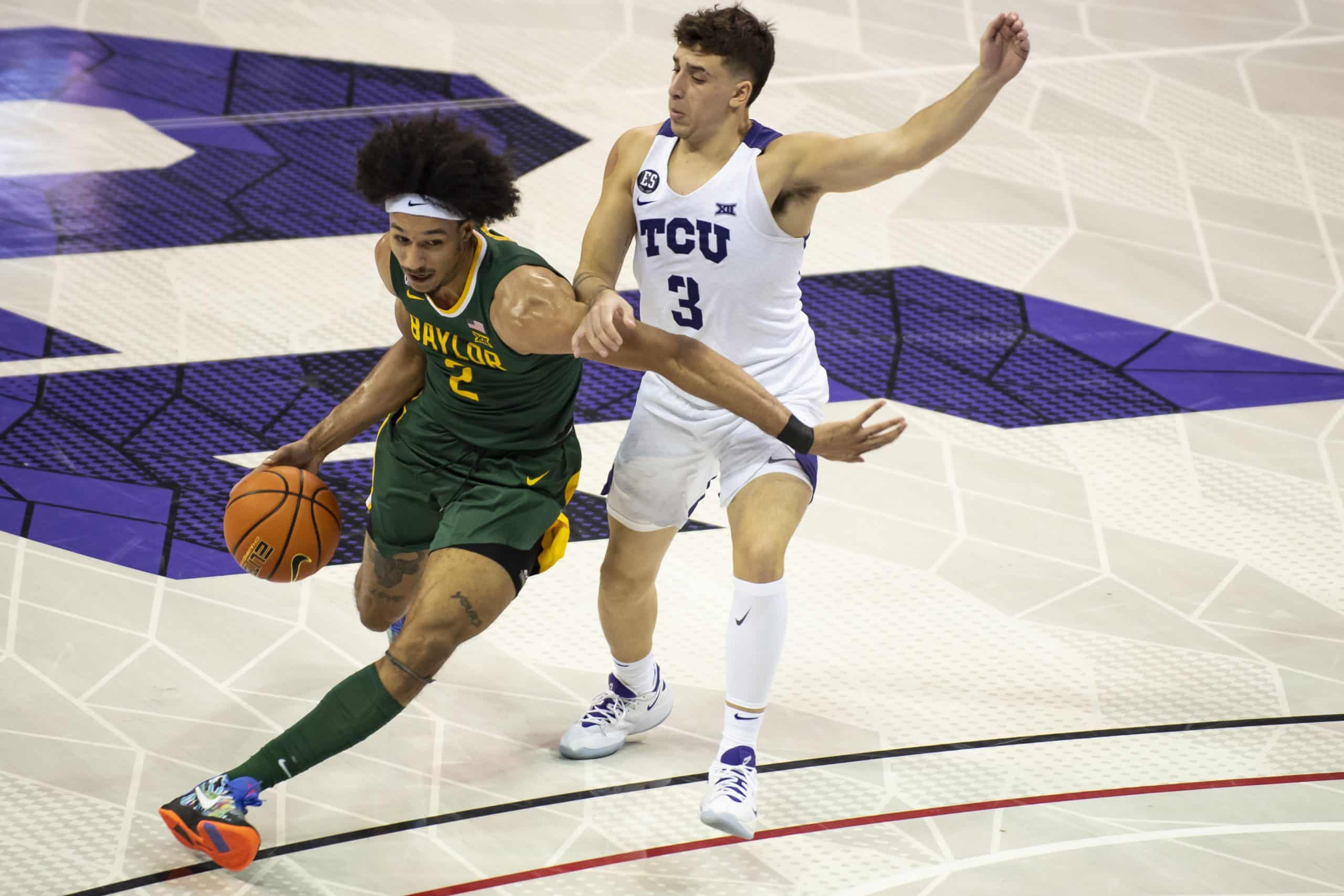 TCU gets it half right, but can’t complete upset bid of No. 1 Baylor

Home » TCU gets it half right, but can’t complete upset bid of No. 1 Baylor

Baylor guard Kendall Brown drives around TCU guard Francisco Farabello as the Bears rallied past the Frogs on Saturday (The Associated Press/Emil Lippe).

FORT WORTH — For 20 minutes Saturday afternoon, the TCU men’s basketball team showed that it can hang with the No. 1 team in the country.

They played well, which a team must do to upset the No. 1 team. The Frogs got some breaks, in the form of a couple banked-in 3-pointers and some missed wide-open looks by the Bears’ dangerous guards, but a team also needs breaks to beat the best.

However, 20 more minutes remained in the Frogs’ delayed Big 12 opener, minutes in which an 18-day layoff caught up team and those dangerous guards couldn’t miss.

The result was a 76-64 Baylor victory that stretched the nation’s longest winning streak to 21 games. Mike Miles Jr. scored a game-high 26 points in the Frogs’ delayed Big 12 opener but was slowed by a wrist injury in the second half as the Bears erased a 37-31 halftime deficit behind the hot shooting of guards Adam Flagler, James Akinjo and LJ Cyrer.

The trio combined for 57 points, 35 in the second half.

“We’re disappointed. You have a lead of nine, six at half, and don’t get it done,” TCU coach Jamie Dixon said. “They’re old, they’re good and their guards simply wore us down. We held them to 22, 20 and 15, and simply put that’s where we got beat.”

TCU (10-2, 0-1) showed that it is better equipped to complete the Big 12 than it was a season ago, but also showed signs of fatigue and lacked its pre-COVID-shutdown rhythm on offense. The Frogs hadn’t played since Dec. 21 and practiced short-handed most of the past two weeks as a COVID outbreak put the program on pause.

Per usual, Dixon refused to make excuses. Miles and Chuck O’Bannon Jr. said fatigue played a factor in allowing Baylor shooters to make eight 3-pointers in the second half, many of them uncontested.

Miles scored only eight points in the second half, just four in the final 18 minutes after injuring his right wrist on a drive early in the second half. He said after the game that x-rays had been ordered but he was hopeful he would be able to play Wednesday night at Kansas State.

“It hurt everything,” he said. “I couldn’t flip it. When I was dribbling I lost it a couple times because I couldn’t do everything I wanted to do. It’s sore right now, but we’ve got a couple days.”

Miles scored seven straight points to a 14-0 run late in the first half. O’Bannon opened the second half with a quick 3 to stretch the Frogs’ lead to nine, and it was eight after Miles converted a four-point play. But he banged his wrist moments later, and both of his free-throw attempts were short.

He quickly motioned to come out of the game.

Flagler, though, scored 18 points in the second half as he hit on 6 of 10 3-point tries. When the guards weren’t draining from distance, they were converting on drives to the basket.

“I think fatigue set in,” said O’Bannon, who scored 12 points. “As we keep going, that’s not going to be a factor.”

Dixon substituted liberally and played Damion Baugh and Peavy with two fouls in the first half to attempt to keep players fresh. All 10 scholarship players logged time. All 10 of them know where TCU must improve if it wants to upset ranked teams, a necessity to emerged as an NCAA Tournament team from the nation’s toughest conference.

Play better defense. Cut down on turnovers. Convert at the rim. And do it all for 40 minutes, not 20.

“We got a chance to against the No. 1 team in the country, and that’s how good you have to be,” Dixon said. “We know what the bar is. We know what we need to do. We saw it, and we can do it because we did it for a half. We’ve got to find a way to do it for 40 minutes.”