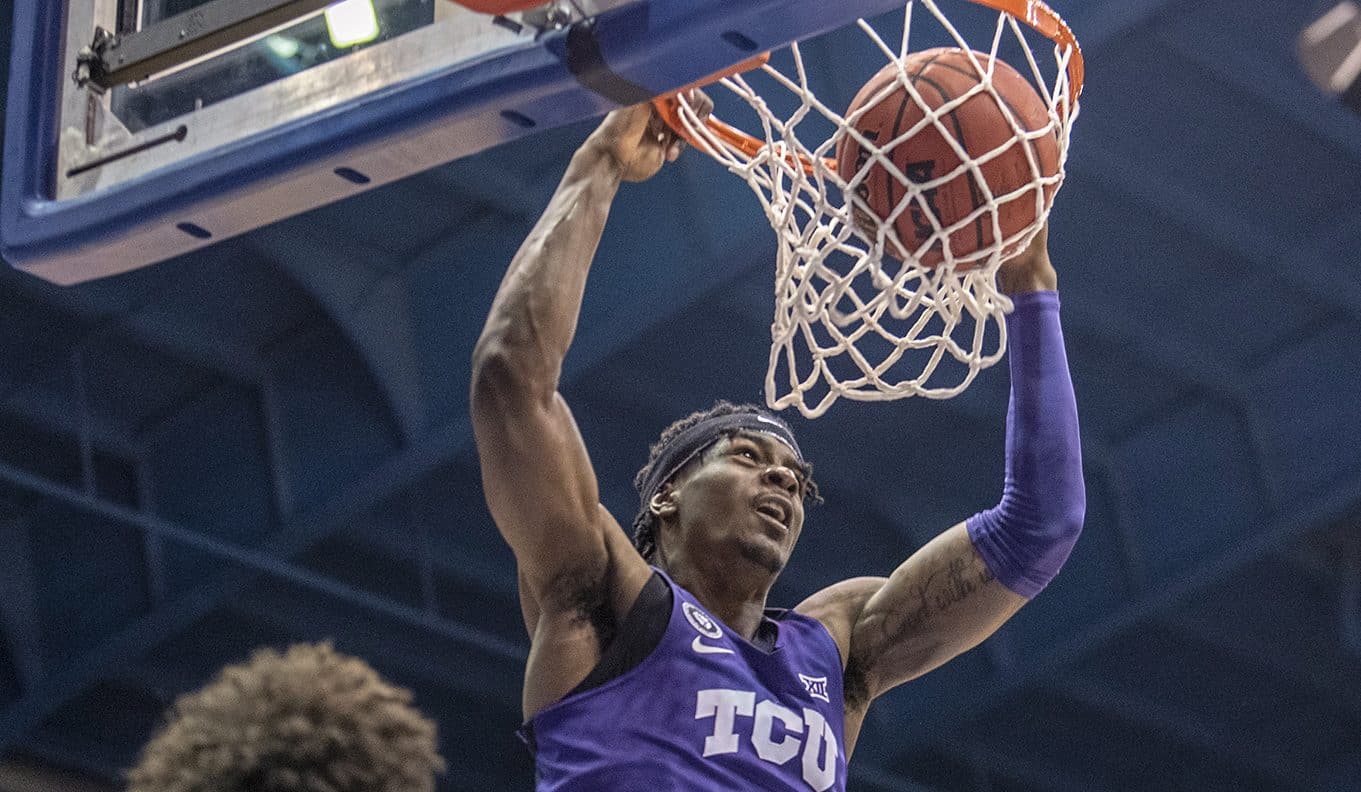 Emanuel Miller matched a season-high 18 points and TCU won the rebounding battle, but the Frogs fell Thursday night to Kansas 72-68 at Allen Fieldhouse.

TCU found itself with an opportunity to force overtime, trailing 71-68 with the ball and 9.4 seconds remaining. Mike Miles took the inbounds pass and drove all the way down the court, forgoing a chance for a 3-pointer and heading to the rim. His shot was blocked by Dajuan Harris, and the Jayhawks recovered the loose ball with 2.8 seconds left. Jalen Wilson made 1 of 2 free throws, sealing Kansas’ victory.

“We said be ready to get a 3, but if we had a layup to go,” TCU  coach Jamie Dixon said, “So that’s on me. Looking at it on replay, I’d take my chances with that. There was obviously contact.

“We could have taken a 3, but I like our best guy going to the rim, too, with that much time left. I thought Mike made the right decision, and I totally support him on that. Downhill, a lot of space, obviously they were guarding the 3-point line.”

Miles finished with just five points on 12 shots, and zero attempts from the free-throw line. Damion Baugh added 14 points for TCU, to go along with five rebounds and four assists. Baugh, who had zero turnovers in TCU’s win over Kansas on Tuesday, had four in the rematch.

Fifteen TCU turnovers led to 25 points for the Jayhawks as the Frogs reverted back to some bad habits. TCU managed to minimize turnovers in their win over Kansas on Tuesday, giving it away just seven times. The Frogs matched that in the first 11:03 on Thursday.

Those turnovers were a large reason TCU’s offense struggled to get into a rhythm early. Eddie Lampkin Jr. scored TCU’s first six points, but the rest of the team made just one basket as Kansas ran out to a 20-8 lead at the 11:47 mark of the first half.

Agbaji struggled in Fort Worth, scoring just 13 points on 17 shot attempts. It was clear from the jump Thursday that he intended to make up for that showing.

TCU deserves credit, too, for battling back after a tough start. For a team that has never won in Allen Fieldhouse, the Frogs showed plenty of poise.

Coming out of the under-12 timeout, Miller began to match Lampkin’s energ and provided the boost TCU needed to claw its way back.

Two consecutive baskets from Miller drew the Frogs to within six, and Damion Baugh followed with a steal of the inbounds pass and a quick layup. It was a sign that, despite the slow start, TCU would continue to fight.

The game was physical, with both teams working hard to get the ball inside and battling on the boards. Lampkin, as he has been so often, was involved to the point of frustrating Jayhawks players and fans. Kansas’ Mitch Lightfoot exchanged words with Lampkin late in the first half, and followed it up with a dunk on Kansas’ next possession. As he came down off the rim, Lightfoot said something to Lampkin that earned him a technical foul.

Francisco Farabello made both free throws, and Jakobe Coles followed with a 3-pointer, pulling the Frogs to within 26-22.

In the second half, foul trouble and turnovers caught up with the Frogs. Miles picked up two fouls in six seconds just three minutes into the second half, giving him three for the night and sending him to the bench with the game tied 37-all.

For a few minutes TCU didn’t miss a beat without their star guard. Baugh and Chuck O’Bannon Jr. powered the Frogs to a 7-0 run in just over a minute, pushing TCU ahead 44-39 and forcing Kansas coach Bill Self to call a timeout.

Miles remained on the bench for 5:15 of game time. TCU maintained a small lead for the entirety of that time, going up by as many as six. With 11:02 left in the game, Lampkin made a pass down low to Miller, who converted the layup to put TCU up 55-51. On Kansas’ next possession there was a scramble for a loose ball, and when the dust settled Miles had been whistled for his fourth foul.

One minute later, Micah Peavy was whistled for his third foul. One minute after that, Lampkin picked up his fourth foul.

All the while, TCU battled back and forth, exchanging the lead with Kansas five times as the clock ticked below the 7-minute mark.

Foul trouble and fatigue seemed to catch up with the Frogs in the final five minutes. With Miles and Lampkin out with foul trouble, the Jayhawks went on a 7-0 run to pull out to a 69-61 lead with 2:34 to go. Turnovers from Baugh and Xavier Cork helped Kansas’ cause.

TCU still trailed by eight with less than two minutes to go, but back-to-back buckets from Baugh and Peavy pulled TCU to within four. After Wilson hit two free throws O’Bannon was fouled while shooting a 3. He made all three free throws to pull TCU to within one shot, 71-68, with 36 seconds remaining.

TCU’s defense, which held Kansas to just 37.9% from the floor in the second half, forced a shot-clock violation on the Jayhawks’ next possession. It was symbolic of how TCU managed to pull out consecutive wins over ranked teams, tough defense and a relentless effort putting the Frogs in a position to force overtime.

“I really thought we did some good things on switching. We contained penetration well.” Dixon said of TCU’s defense.

Officials added a second to the clock following a review, giving the Frogs 9.4 seconds to try and force overtime. Instead, the Frogs fell just shy of their first win ever in Allen Fieldhouse.

Desptie the outcome, TCU has spent the past six days showing the country that they are capable of competing with anyone. O’Bannon, who finished the game with 10 points, reiterated that after the game.

“It shows that we can compete with anybody.” O’Bannon said. “We haven’t been ranked once this season, but I do truly believe that we are one of the top 25 teams in the country. We also believe that we can go far in this tournament, and that’s what we’re looking to do.”

TCU’s sprint to the finish line isn’t quite over yet. Shortly after the game ended Thursday, the Frogs got on a plane and headed straight to Morgantown where they’ll close the regular season Saturday afternoon at West Virginia.

“Very important. We want to finish the season .500 in conference,” O’Bannon said. “That’s a big accomplishment in this conference, so that’s what we want to do. This game is over with, so now it’s time to focus on the next opponent.”