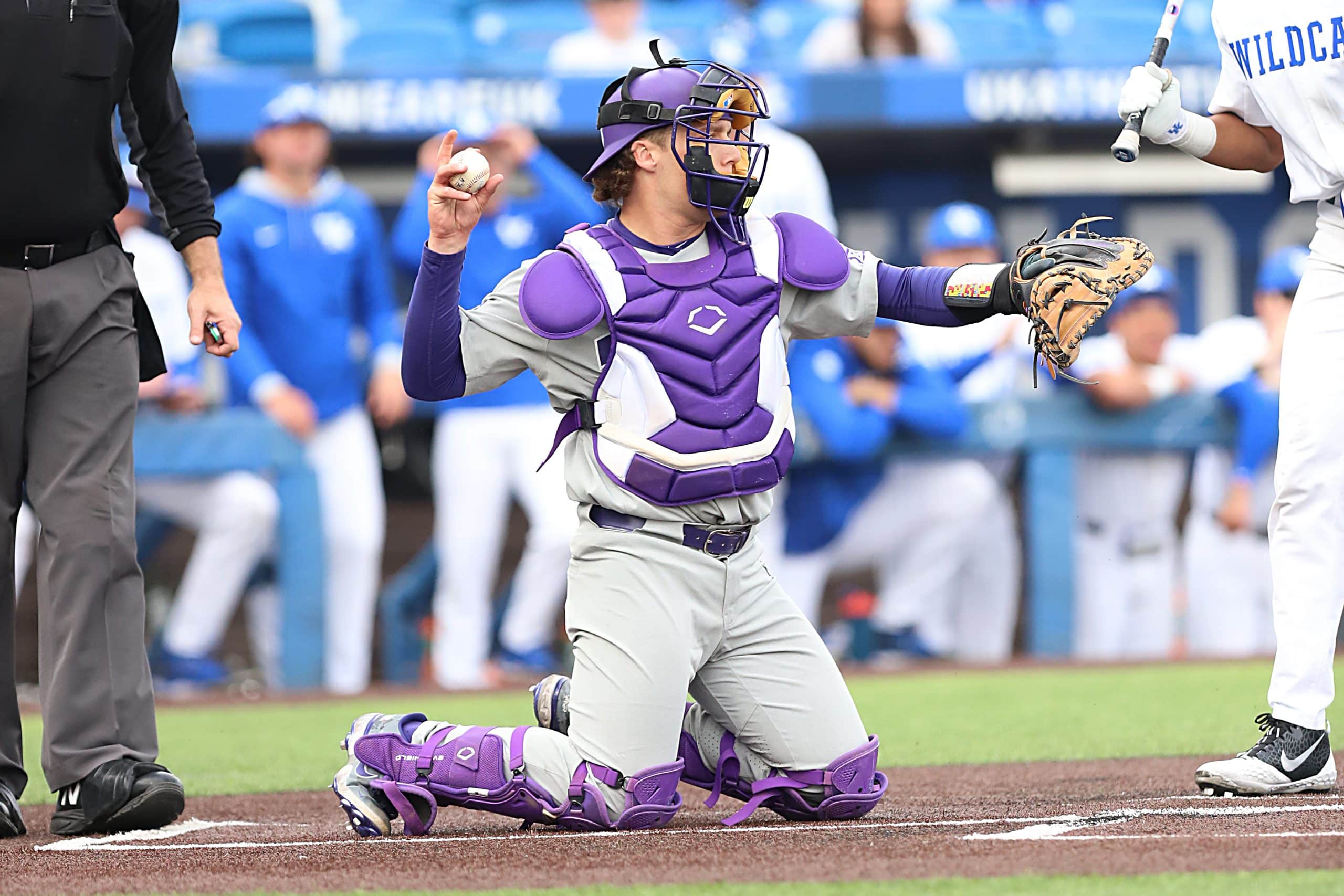 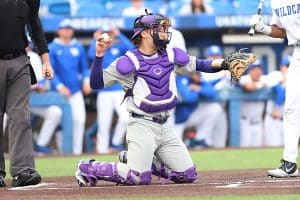 TCU catcher Kurtis Byrne went down with an injury during TCU’s 13-11 loss to Kentucky (TCU baseball).

TCU and Kentucky took the field to play baseball on Friday afternoon and a four-hour marathon took place. The Frogs fell to the Wildcats 13-11 in a game that saw nine pitchers used and over 360 pitches thrown.

The loss drops TCU to 7-2 on the season, ending their six-game winning streak. Kentucky improves to 9-1 with the win.

Austin Krob, who had been dominant in his first two outings of the season, didn’t have his best stuff. The junior lefty lasted just two innings, giving up seven runs on seven hits, with two walks and two hit batters.

Marcelo Perez was eventually saddled with the loss, after giving up two runs in the bottom of the eighth, while Sean Harney earned the win for Kentucky.

David Bishop drove in three runs for TCU, bringing his season total to 16. Elijah Nunez went 4 for 5 from the plate, scoring three runs and stealing his team-leading eighth base of the season.

TCU wasted no time, jumping on the Wildcats immediately. Three runs in the top of the first gave the Krob cushion, and seemed to have the Wildcats — projected to finish 11th in the SEC — on their heels.

Kentucky responded in the bottom of the inning. Krob carried a 0.00 ERA into the contest, but that was a distant memory after the first inning. He conceded five runs before he had three outs.

Control was an issue for Krob, who walked two and hit two in the first. The junior needed 38 pitches to get through the inning.

A two-run home run from Jacob Plastiak got Kentucky on the board and started a run of seven consecutive runners to reach base. When the dust settled, the Wildcats held a 5-3 lead.

Meanwhile, TCU, which is already down a catcher with Michael Petrie out due to a broken wrist, saw Kurtis Byrne go down in the second inning.

Byrne led off for TCU and took a pitch to the face on an 0-2 count. He went to the ground for several minutes as trainers tended to him by home plate.

Byrne eventually walked off the field under his own power, as Bobby Goodloe took his place on first base.

Krob’s rough outing continued in the second inning. He struck out the first two in the inning, flashing the control on his slider that had made him almost untouchable.

But then Kentucky strung a two-out rally together, scoring two runs on a pair of singles, a wild pitch, and a double. Krob managed to get out of the inning, but that would end his day.

TCU needed a stabilizer, and they got one in the form of Connor Oliver.

Coming on in relief of Krob to begin the third inning, Oliver worked around a two-out single. In the fourth Oliver struck out the side, freezing all three batters on great pitches.

As Oliver brought stability to the mound, TCU’s bats came alive again in the top of the fifth. Two more RBIs from Bishop cut Kentucky’s lead to 7-5.

A wild pitch scored Brayden Taylor, and an error by Daniel Harris brought another Frog across the plate, tying the game at 7.

Goodloe then gave the Frogs an 8-7 lead, hitting a ground ball to second that scored Tommy Sacco.

The Frogs’ lead was short-lived. Oliver, who had been stellar through two innings of work, loaded the bases with one out in the bottom of the fifth. Kentucky took advantage, knocking Oliver out of the game and scoring four runs to claim an 11-8 lead.

In accordance with the game’s “no lead is safe” rule, TCU promptly responded in the sixth inning. The first four batters of the inning reached base for TCU, with Nunez coming across to score.

Back to back groundouts from Gray Rodgers and Sacco brought Boyers and Taylor across home plate, with the Frogs once again knotting things up. This time, at 11.

After a clean seventh inning for both teams, TCU went down in order in their half of the eighth.

Marcelo Perez, in his second inning of work on the night, came out to pitch the bottom of the eighth for the Frogs. He conceded a single to Harris, who moved to second on a sacrifice bunt.

A wild pitch moved Harris to third, setting up Kentucky’s catcher, Alonzo Rubalcaba. With the infield in, Rubalcaba hit a sharp ground ball to Bishop, who tried to make the play at home plate.

Harris beat the throw, giving the Wildcats a 12-11 lead. Tommy Vail came on in relief of Perez, and conceded another run, bringing the game to its final score.

UP NEXT: TCU and Kentucky retake the field on Saturday at noon, with TCU looking to get back in the win column.

Riley Cornelio will pitch for the Frogs, while Magdiel Cotto is expected to take the mound for Kentucky.