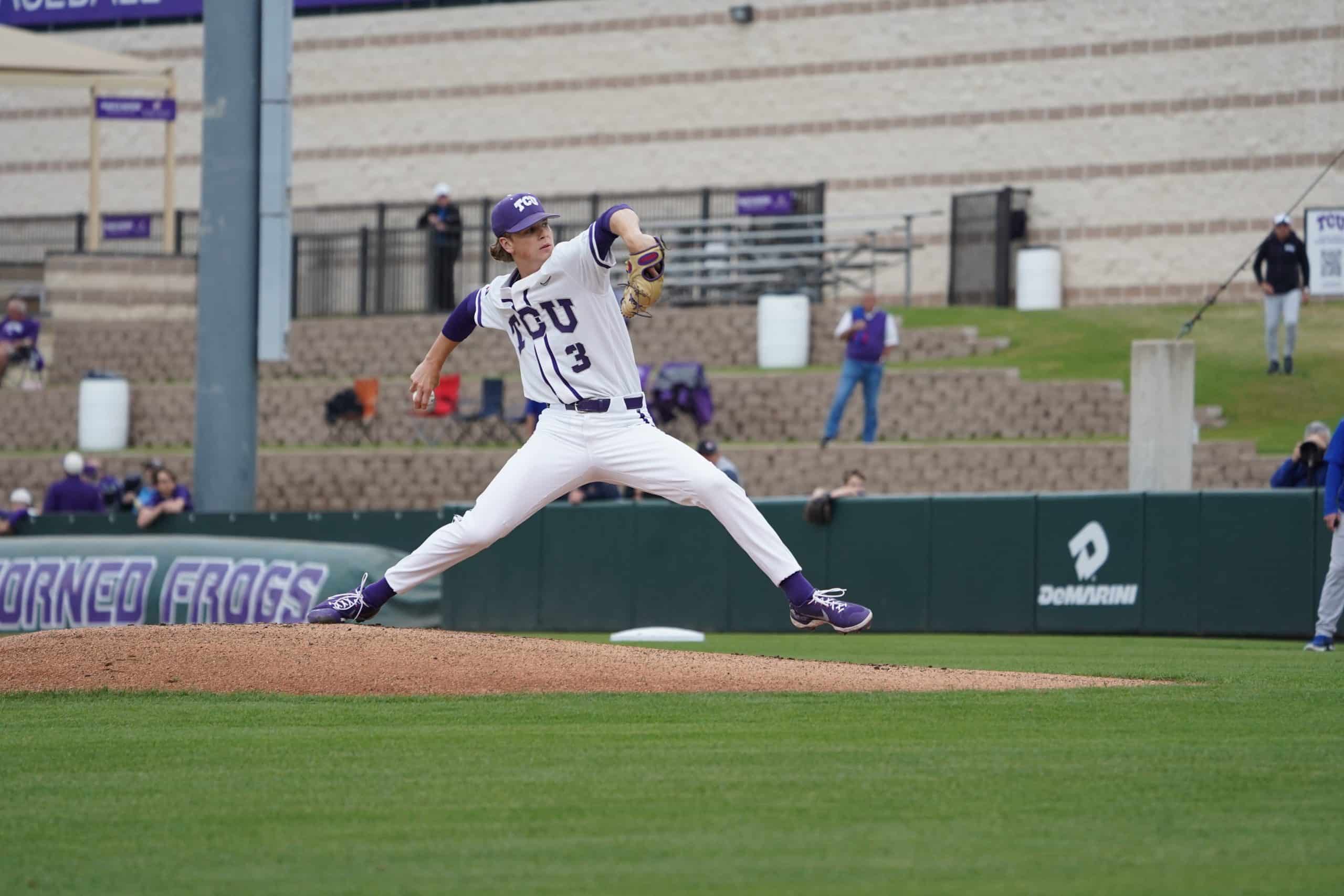 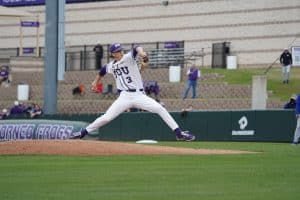 TCU extended their winning streak to four on Tuesday night, beating UT-Arlington 15-1. The Frogs used the “death by a thousand paper cuts” method to beat the Mavericks, racking up 16 hits, including five doubles, and nine walks in the seven inning, run-rule victory.

True freshman Caedmon Parker made his fifth consecutive midweek start for the Frogs, recording a new career high strikeouts with four. Parker also pitched four complete innings for the first time this season. After the game, Parker noted that he had much better control of his slider than in previous starts.

“That’s one of the main things we worked on,” Parker said, “Just being more consistent. Not trying to place it, but same release point every time and it’ll look similar.”

Parker has improved over the course of his time as TCU’s midweek starter, and Kirk Saarloos has noticed. They’ve worked together on how to improve Parker’s arsenal, including locating his slider, and Saarloos recognized his progress after the game.

“His last start I think he was way better than the previous start,” Saarloos said, “We had talked about throwing his secondary for strikes and how that’s going to make him even better, and today he did it.”

TCU struck first in the bottom of the second inning. With Bobby Goodloe and Luke Boyers on base, Gray Rodgers hit a double to the wall in left-center field. Goodloe and Boyers came around to score, putting TCU up 2-0.

The Frogs didn’t slow down, tacking on another run when Tommy Sacco singled home Rodgers. Brayden Taylor then walked to load the bases, and Kurtis Byrne drove everyone home with a double to left-center field.

One pitch later Byrne scored on a single by Reed Spenrath, pushing TCU’s lead to 7-0.

The Frogs tacked on eight more in the bottom of the fifth, aided by a misjudged pop up. Before that, though, Taylor got the scoring underway with a double that scored Nunez. One batter later, Byrne singled to left scoring Sacco and Taylor.

A Boyers ground-rule double extended TCU’s lead to 11-0, before Sam Thompson stepped up to the plate. With the bases loaded and two outs, Thompson seemed to pop up to end the inning. Instead, though, UT-Arlington’s shortstop misjudged the pop up in shallow right field, and the ball fell to the ground untouched. The bases cleared, and Thompson advanced to third, then home, on an errant throw to the plate that skittered all the way down the third base line.

With the game well in hand, Saarloos made mass changes to the lineup, giving experience to guys who haven’t seen much of the field this season. Mason Speaker entered the game at catcher, while Brody Green relieved Taylor at third base. Porter Brown also entered the game in left field, while Hunter Teplanszky entered at shortstop.

UT-Arlington broke up the shutout in the top of the seventh, using two wild pitches from Braxton Pearson to score their lone run.

Playing Time For Everyone

In all, TCU used six pitchers throughout the game, something Saarloos said he wanted to do in the midweek contest.

“That’s what we hope to do on Tuesdays, so it was awesome to see Braxton Pearson out there.” Saarloos said. “I wanted to see Trip Banta against a lefty, and Trip came in and struck the guy out. Then to get Garrett Wright back out there and Gray Thomas, Cohen Feser as well.”

Beyond just pitchers, TCU also used 15 players in the field. One of the best things Saarloos noticed on the night? How his regulars handled being in the dugout.

“The best thing that I saw tonight was when you have Tommy Sacco, Gray Rodgers, Brayden Taylor, Kurtis Byrne, Elijah Nunez in the fifth, sixth, and seventh innings, not one of those guys was tuned out against the back wall.” Saarloos said. “They were all in the front row, super excited for the opportunities the guys that came in after them had. That says a lot. That didn’t come from anybody in the dugout, but each one of those guys was on the top step cheering for them, just like those guys cheer for them when they’re playing. That tells me a lot in terms of what we have in our dugout.”

The Frogs also received some good news and bad news on the injury front. Austin Krob has continued to rehab, and pitched again this week. Saarloos noted that Krob is feeling good, and hinted that the junior lefty could be on the active roster this weekend. Catcher Michael Petrie is also inching closer to playing again. The grad transfer from Washington took batting practice this week on his way back from a broken forearm. Saarloos said that Petrie is probably a week away from returning to action.

On the other side of injury news, Saarloos confirmed that freshman outfielder Logan Maxwell is done for the season with a torn labrum. Maxwell will have surgery this Friday to repair the tear. the Frogs used a combination of Gray Rodgers and Garrison Berkley in left field during the Texas Tech series, and it seems as though they’ll move forward with that duo for the foreseeable future.

TCU now sits at 25-12 on the season, as they prepare to head to Stillwater for a series with Oklahoma State this weekend.