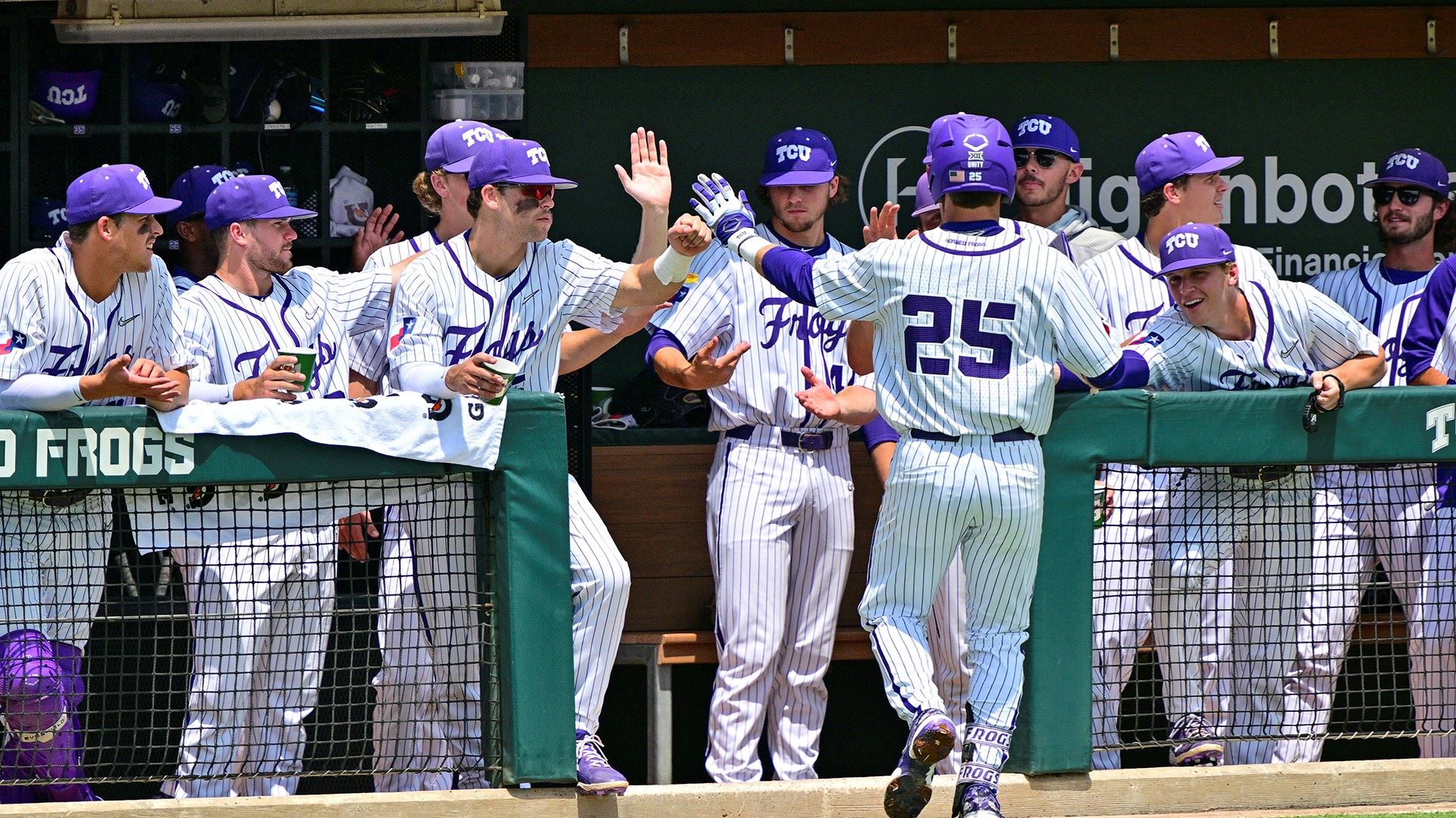 Sooners even series with Horned Frogs with 11-7 victory

Home » Sooners even series with Horned Frogs with 11-7 victory 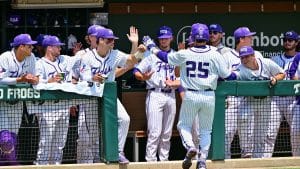 Tommy Sacco heads back to the dugout after hitting his second home run of the day against Oklahoma (TCU Baseball).

“We played with fire in the first two innings and got away with it,” TCU head coach Kirk Saarloos said. “And ultimately if you play with fire you’re going to get burned eventually. And they did. [Oklahoma] didn’t get very many hits, but when you walk that many people you don’t allow people to get very many hits.”

Oklahoma jumped on Marcelo Perez in the third inning, taking advantage of four walks and a hit batter to drive two runs home. The Sooners added a third run in the inning on a throwing error from Kurtis Byrne while attempting to catch a runner stealing third base.

Perez opened each of the first four innings by putting a Sooner on base. In the first three innings he issued walks to the leadoff man, and in the fourth inning he hit  Wallace Clark with his final pitch of the day. Saarloos had seen enough at that point, and he called on River Ridings out of the bullpen. Ridings managed to get the Frogs out of the inning unscathed.

In the fifth inning, TCU conceded three more runs to the Sooners, as Oklahoma extended their lead to 6-0. In the bottom of the inning Kirk Saarloos was ejected from the game by home plate umpire Jim Schaly. Saarloos had words for Schaly from TCU’s dugout, and the home plate umpire first issued a warning, then moments later threw Saarloos out of the game.

For a moment it seemed as though the Frogs would be inspired by the ejection. Just one batter after Saarloos was tossed, Tommy Sacco launched his ninth home run of the season into the general admission seating in right field, cutting Oklahoma’s lead to 6-2. The deficit only remained four for a moment, however.

After the Sooners pushed their lead to 10-2 with a four run sixth inning, Luke Boyers cleared his fifth home run of the season, making it a 10-4 ballgame.

The Sooners tacked on another run in the top of the seventh, and the score held at 11-4 until the bottom of the ninth.

In the top of the ninth, Hunter Teplanszky came on to pitch for the Frogs. Teplanszky, a middle infielder, pitched in high school.

“Part of that with Teplanszky was to not use anybody that we might have to use tomorrow,” Saarloos said. “But part of that was to sometimes show how easy the game can be when you throw it over the plate.”

Teplanszky needed just 13 pitches to get through his inning of work, allowing the Frogs one last opportunity for a comeback.

TCU managed to cut into the Sooners lead in the final frame, despite falling in the contest. With two outs and two runners on base in the bottom of the final frame, Tommy Sacco hit his second home run of the game.

Sacco becomes the first TCU player to hit a home run from both sides of the plate in the same game since Josh Watson accomplished the feat on March 6, 2018, against UT-Rio Grande Valley.

“At the end of the game, Bishop makes an unbelievable play over his shoulder,” Saarloos said. “We get a couple of runners on in the ninth and Tommy [Sacco] hits a homer. From the defensive side and the offensive side there were some good things towards the end.”

TCU and Oklahoma face off on Sunday at 1 p.m. for the rubber match. It’s an important game for the Frogs, who currently sit one game behind Oklahoma State for first in the Big 12, and also just one game ahead of Texas Tech for second. With just four conference games left, the Frogs need to close out strong.