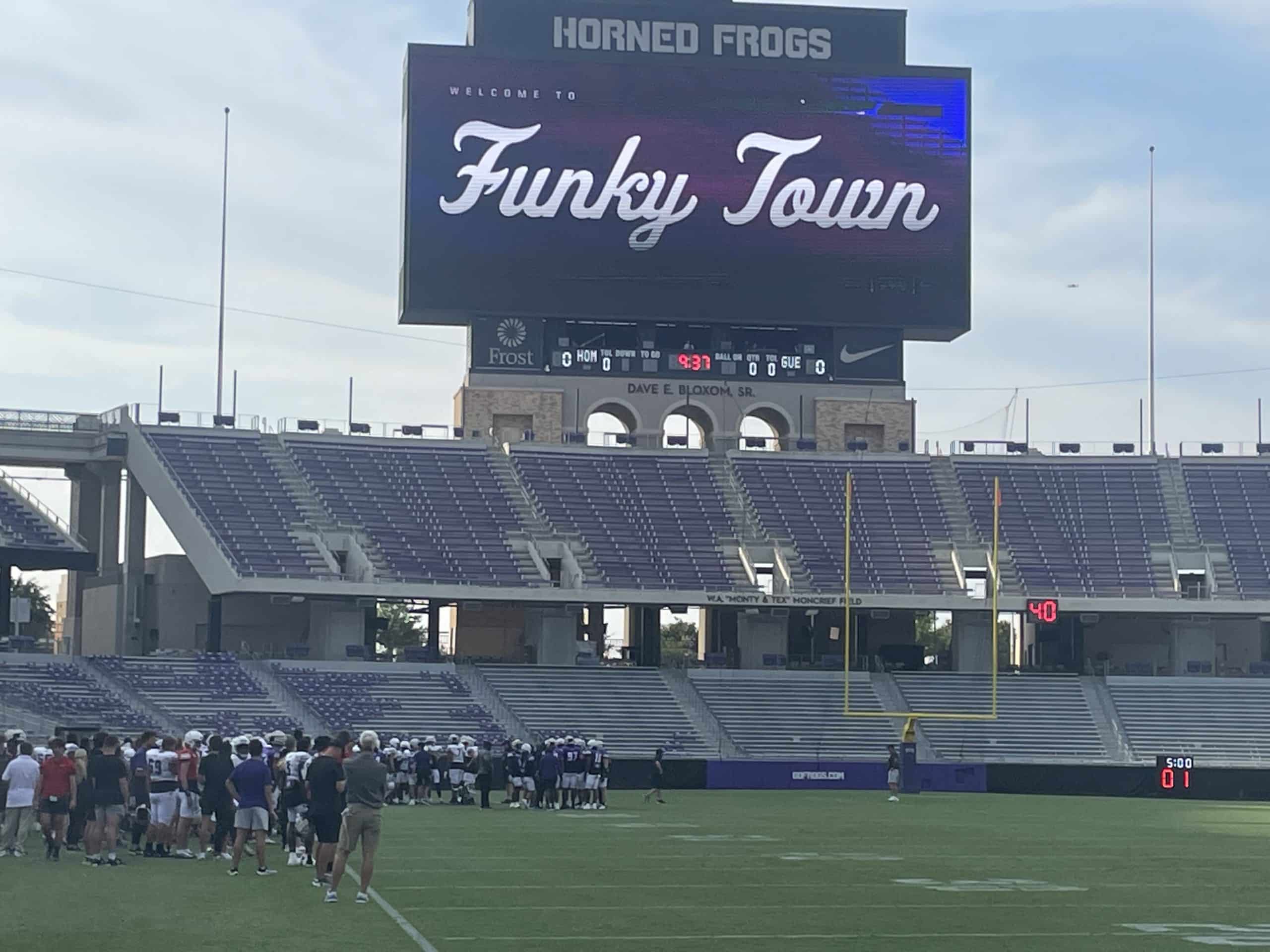 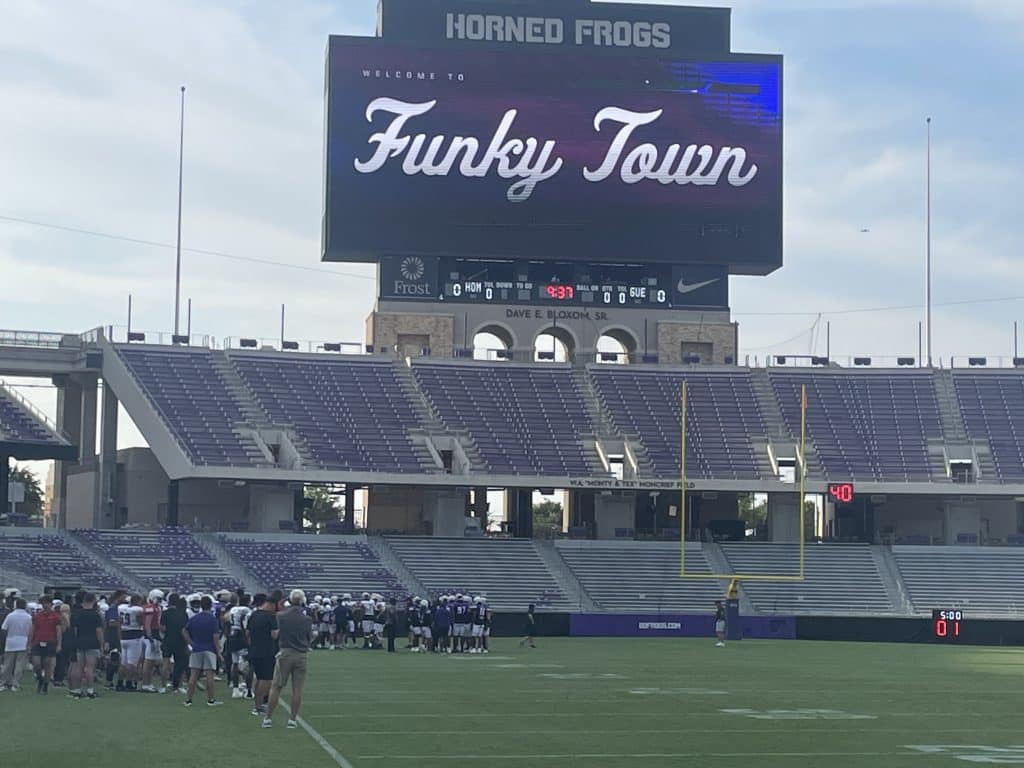 The Horned Frog football staff and players have been preaching an “all about us” mentality since they arrived (Frogs Today file photo).

FORT WORTH — Football coaches often agonize over opponent film, walk-throughs of the other team’s scheme, and getting scout teams to “do things right” or simply “do it again.”

Moreover, coaches and players comb through scouting reports — learning personnel; handicapping strengths and weaknesses; memorizing heights, weights and speeds; pouring over season and career statistics; and oftentimes learning obscure, fun tidbits about who their high school mascot was or what their college major is or used to be.

So when we hear the TCU coaching staff continue to say “it’s all about us” and players echo the same company line, we tend to get a bit confused. Wait — I thought it is about being as prepared for your opponent as humanly possible?

As cliche as it may seem, proper preparation is, in fact, a major key to success. However, as we are learning from this current Frogs football program, preparation is not always just on your opponent. Preparing yourself to win may be equally, if not more important.

At the very least, those two approaches are not mutually exclusive.

“Our focus is always on our performance in ourselves won’t change,” coach Sonny Dykes said. “Really, no matter who we play, it’s never going to be about our opponent. It’s always going to be about us and trying to play to our standard — regardless of who it is.”

We have heard these sentiments throughout fall camp, but they have certainly been amplified this week going into a game versus an FCS opponent. Dykes feels that regardless of what division this Tarleton State football team is in, they have some really good players and that makes the Frogs focusing easier.

“The normal thing that young people do sometimes is just overlook teams occasionally,” Dykes said. “That’s going to be the big thing for us, is just learning how to not do that. We are going to point out example after example of FCS teams meeting traditional powers. It’s easy to find those examples. So you just want to make sure that the guys understand that we are worried about ourselves.. That’s our focus, and it’s always going to be our focus, to control what we can control – how hard we play and how well we do our job.”

Regardless of if a team lines up against a traditional power or they line up in practice against air, there are always team operation procedures to work on.

When you hear the Frogs staff preach that it is “all about us,” it doesn’t mean that they are not preparing for an opponent, but rather that their own team needs to learn how to prepare regardless of the opponent. Focusing on themselves includes the process of preparation and getting better at that process each and every week.

When offensive coordinator Garrett Riley looks at his slow start from last week, he really is looking internally on what they can do to fix it and start faster on offense.

“We’ve just got to take care of our own stuff early on and what we do,” Riley said. “I think if we do that, we will be in good shape to get off to a good start, to be able to make routine plays. But at the end of the day, that’s what we have to focus on. It was like this last week and same for this week. It’ll always be all about us.”

Riley said having a mature group makes things easier to get them to focus on their own responsibilities. For Riley, it is more than just a mantra or coach-speak that you often hear spewed at the podium. He feels strongly that you need to have the mentality of being where your feet are and worrying about yourself in order to be a great team.

“It is kind of that same same message every week, man,” Riley said.  “We are so jacked up and fired up to play. We don’t care who it is. I mean, it truly has to be that if you want to be a championship caliber team. You just have to have that mentality, and we’ve been talking about that ever since we’ve gotten here. It has to be the same approach to Tarelton that we have for the Big 12.”

For the offense in practice, this includes communication, team operation of getting set, proper splits, on-time for cadence, making their calls at the line of scrimmage, having precise and refined pre-snap movements (motions, shifts, and various formations) and playing with great effort and tempo.

All of these things the Frogs can strive to be elite in, and none of them includes outside factors, including whoever their upcoming opponent is.

It’s very similar on defense. Getting the defensive signals and offensive personnel in a timely fashion is critical and needs to be practiced constantly. From there, echoing the calls on the field and identifying the offensive formation to have proper alignment are critical.

Having “eye discipline” by focusing on individual keys and not getting duped by window dressing from the offense can be rehearsed regardless of who they are playing in a given week. Recognizing what their assignment is on a play and executing that within the structure of the defense is a learned skill.

What angles you take to get the football and hustling to arrive violently are habits that can be sharpened regardless of the jersey color. On defense, tackling is a skill, but it is also an effort-based action.  So, when coaches are preaching to worry about themselves, there is a methodology that goes along with it.

For defensive coordinator Joe Gillespie, it is first about identifying what those “controllables” are.

“We have to look at things and say what are the most controllable things right now and then focus on getting better at those,” he said when talking about Tarleton State. “We cannot control what they do. We have to worry about ourselves and what we do. At the end of the day, we’re going to come out and we’re going to see a few things that are different than just saying that we have control over this, what we do and how we play the game. And so we go out and we’re playing our style of football, then we should be able to go and take care of business. And that’s our full intention.”

While it may be an old coaching adage to “worry about themselves,” the message from the TCU coaching staff seems to be one that is consistent, permeating throughout the program, and lived out in practice.

Most importantly, there is a plan behind the message.  Frogs fans are anxious to watch that plan come to fruition in the home opener against Tarleton State.