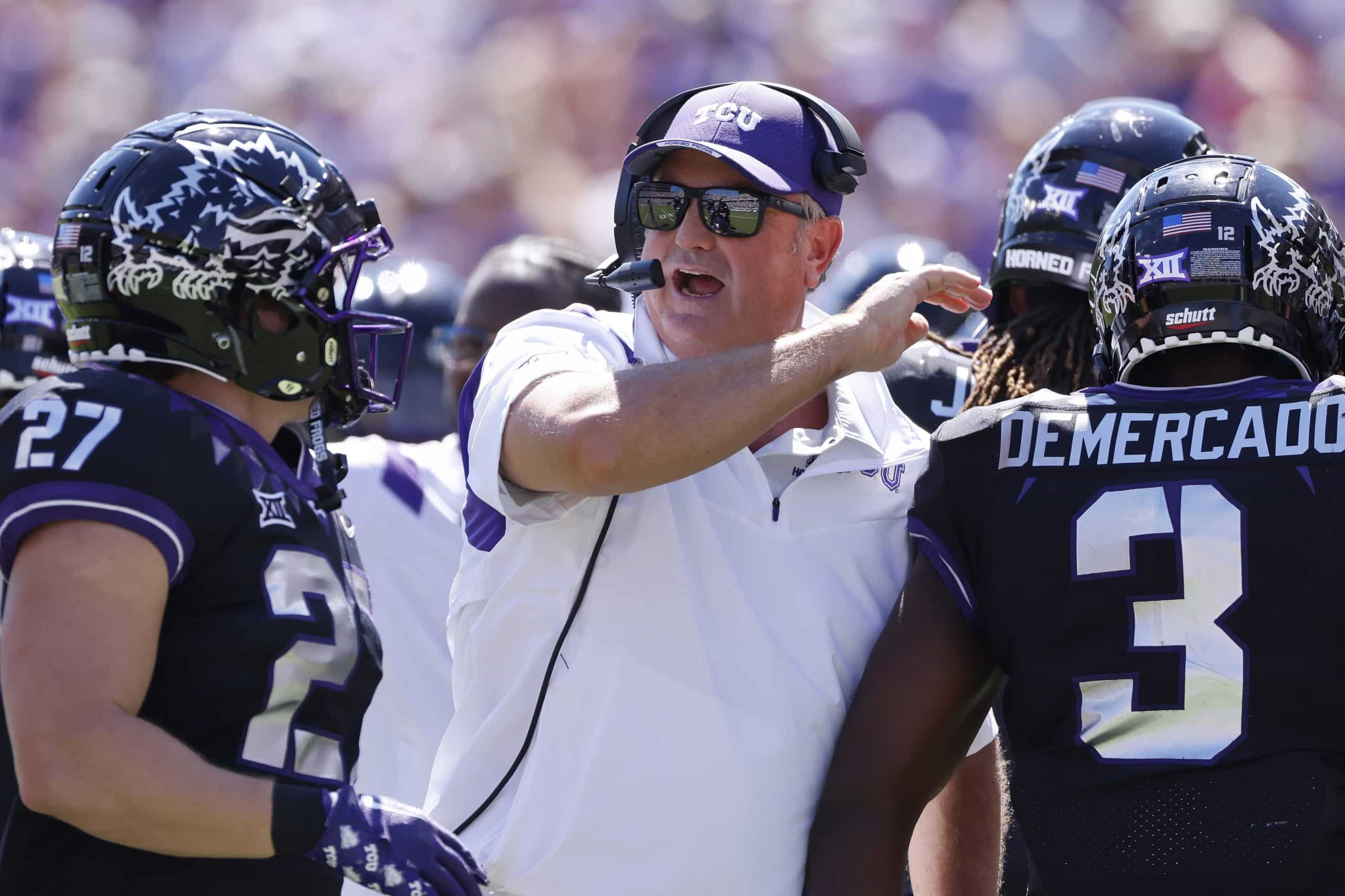 By Skiff BaylessOctober 3, 2022No Comments 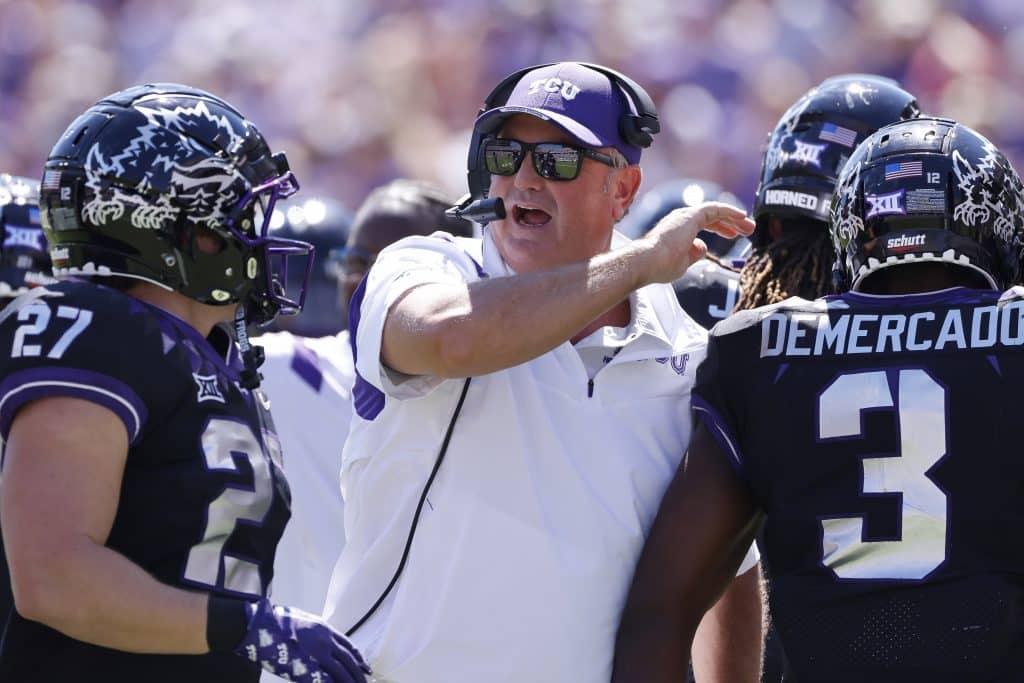 TCU coach Sonny Dykes celebrates with his players after one of six first-half, demon-releasing touchdowns against Oklahoma (The Associated Press/Ron Jenkins).

By Skiff Bayless
Frogs Today righteous dude
I was raised on Oklahoma football.

I grew up in Oklahoma City where, in fifth grade, I played second string safety for the Christ the King Knights. We were coached by Ron Ripley, a notorious boozehound and wife-beater. His love language was the Oklahoma drill.

My best play was the “run and grab.” This was usually deployed midway through warmups when Coach Ripley would yell at me to “run and grab” his cigarettes from his glove box.

We practiced at the aptly named Optimist Club where Coach Ripley was anything but.

“You guys are gonna get your asses kicked!” went his pregame pep talk.

My most notable athletic achievement came during a scrimmage against the St. Charles Rockets one hot August day when Coach Ripley declared me “the biggest pu**y ever.”

We went 0-6. At the year-end banquet, there weren’t enough participation trophies, so Coach Ripley promised he would order “an extra one” for me. I’m still waiting.

Most of my memories from that year are locked away in my hippocampus, somewhere between the time our band teacher demonstrated how to French kiss on the CPR dummy and the tickle contest with Father Jim during the acolyte appreciation sleepover.

Naturally, I have trust issues where Oklahoma football is concerned. Our annual game against OU triggers this trauma.

Instead of exorcising my demons, this game exercises them, giving them the strength to haunt me for another year.

I wasn’t sure how much more I could take. A few months ago, my therapist and I took inventory of the emotional footprints that transcend my childhood and decided the only way to heal was to confront my past.

I had to go back home.

I asked Jerf if he would ride along.

He was reluctant. His people are from Atoka, in southern Oklahoma, but he hasn’t been back in years. Last time he visited, he had his front teeth knocked out at a cockfight by an old lady wielding a metal crutch.

I promised Jerf a brief stopover at the Choctaw Gaming Center where they had nickel slots and sold authentic, hand-rolled cigarettes.

Shortly after we arrived, Jerf joined a game of blackout bingo.

In the lobby of the casino, a coin operated Indian Medicine Man will tell your fortune. I was trying to save my quarters for the pay phone in case we encountered some trouble, but I was anxious to know my future.

The fortune teller always begins with the bestowal of a Native American nickname, which is obviously a randomly selected adjective followed by a type of animal. Like Running Bear or Screaming Eagle.

“What would you like to know Awkward Possum?” asked the monotone Shaman.

I was nervous about this trip home, so I decided to see what advice a pre-recorded, culturally insensitive novelty might offer.

“How can I rid myself of my haunted football memories?” I whispered to the machine.

“Here is a coupon for 20 percent off your first craft beer in the Double Down Lounge.”

I tore the ticket from the slot below and muttered: “What a joke.”

As I walked away, I thought I heard the machine.

“I’m not the one in therapy, jackass.”

There was a brief pause.

“Please insert another quarter to know your fortune.”

I fished a quarter from my pocket and started again. The machine sputtered to life.

Medicine Man cut me off.

“The path will not be easy, but a strong warrior and his fleet foxes will guide you,” came the enigmatic reply. “It is there you will find your tribe.”

Unfortunately, that was about the time Jerf sprinted by.

Without getting into too much detail, let’s just say we can cross Native Americans off the list of ethnicities Jerf has not yet offended.

A beautiful blue sky greeted the Frog faithful Saturday morning. Something sweet filled the autumn air. This felt … different. Still, I was nervous.

I needn’t have been.

Once again, Max was the catalyst. Then came Williams, then Barber, then Gunnar, then Miller.

This was over by halftime.

The Pride of Oklahoma marching band tried to rally their troops with a last gasp of Boomer Sooner midway through the third quarter. But it was too late. With 10 minutes left, the TCU student section belted, in unison, a drunken, rousing version of “Don’t Stop Believing.” No doubt the Sooners would have gladly welcomed a midnight train going anywhere.

It was sublime, my catharsis complete.

We won despite several questionable calls including a bullshit celebration penalty and a phantom fair catch. Those would prove to be only minor blips on the way to a 31-point victory. But they were a reminder that the hierarchy does not easily abide challenges to the Big 12 power dynamic.

Which is why next week in Lawrence will be so damn delicious.

As we left the stadium I felt a release followed by a revelation.

This is my tribe. Maybe not by blood or birth. But by a different bond. One forged in the fires of defeat. And one which makes victory taste that much sweeter.

I may be Sooner born and Sooner bred, but when I die? I’ll be Horned Frog dead.