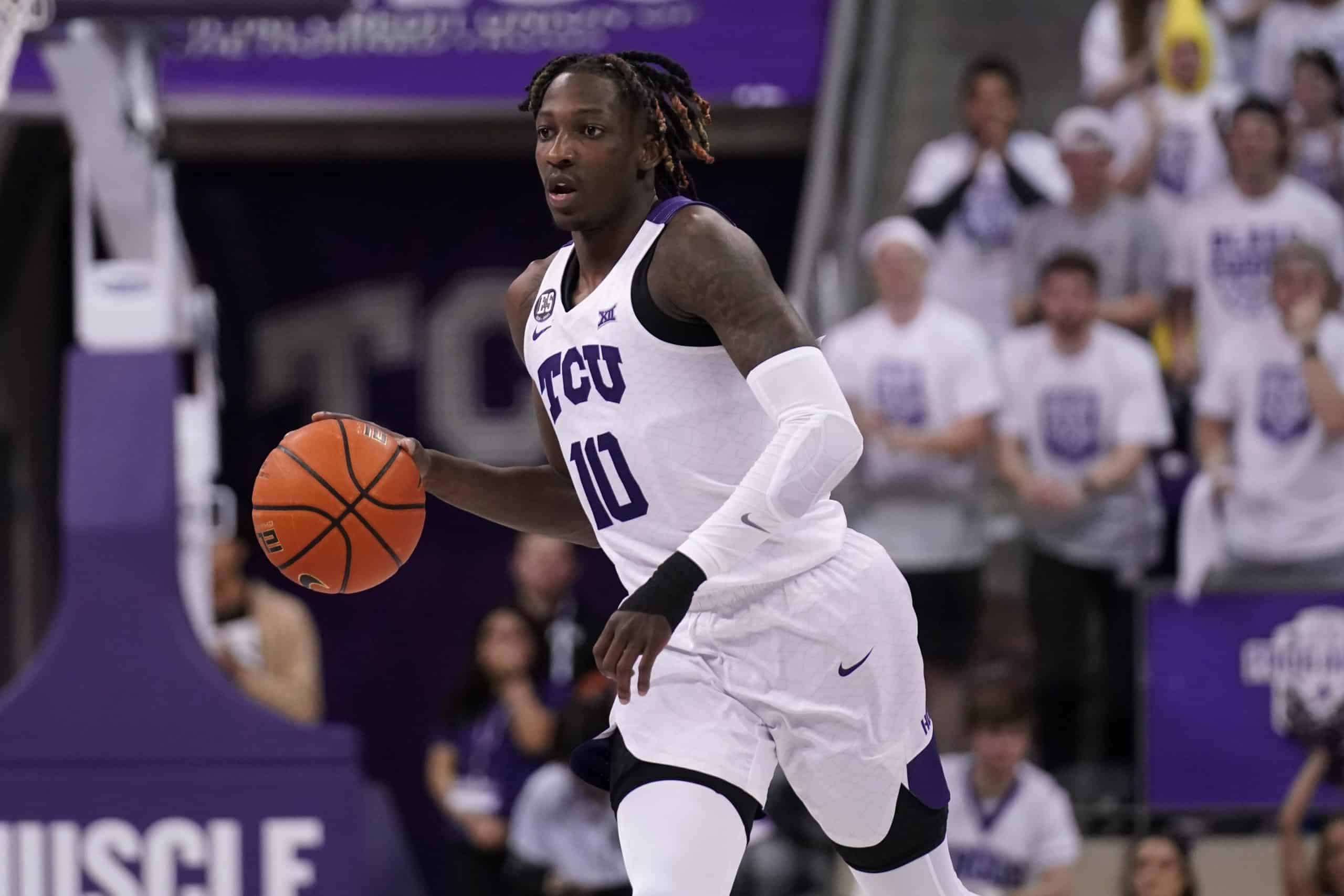 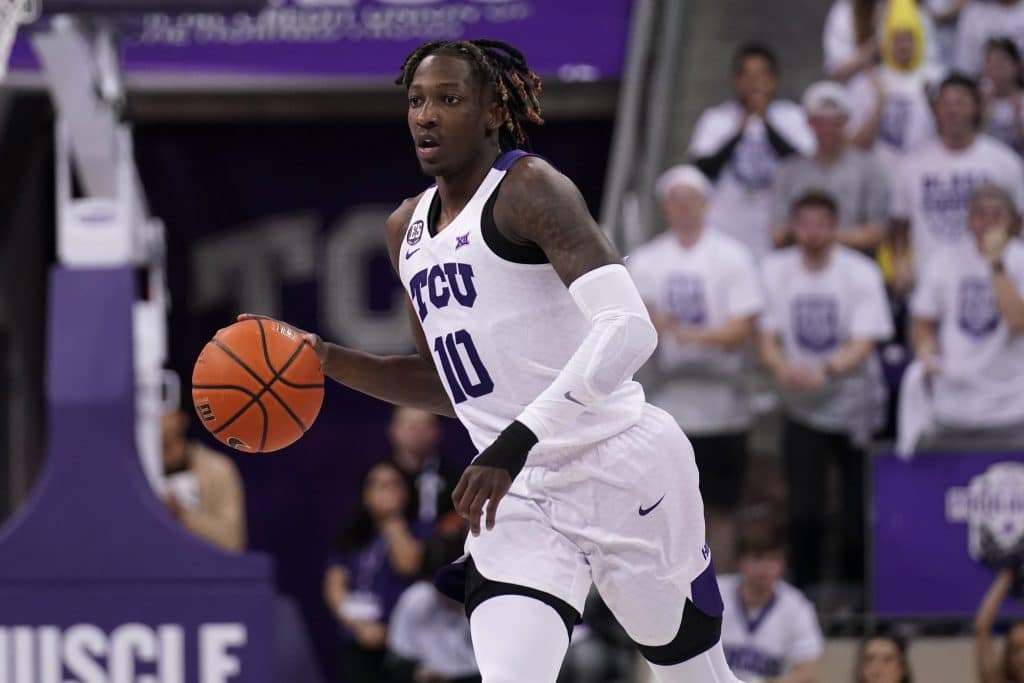 Damion Baugh is returning to TCU, which will return all five starters from its NCAA Tournament team last season (The Associated Press/Tony Gutierrez).

The Horned Frogs saw guard Rondel Walker announce Saturday that he was leaving Oklahoma State for the Horned Frogs, and guard Damion Baugh said on Sunday that he would not be pursuing professional basketball, either via the NBA Draft or playing internationally.

Walker, who can work the point as well as play off the ball, essentially replaces Francisco Farabello, who transferred to Creighton. Baugh’s return means that all five starters will be returning to a Frogs team that was a whistle away from the Sweet 16.

Mike Miles Jr. also declared for the NBA Draft but opted to return for his junior season.

It all adds up to TCU solidifying its place as a Big 12 contender, and the Frogs are a trendy pick in those way-too-early top 25 polls. One has them ranked 10th.

There will be high external expectations for a team that went 21-13 last season, expectations that TCU hasn’t had since at least the Billy Tubbs era.

The Frogs will get practices under way Wednesday with the beginning of voluntary workouts. Coach Jamie Dixon said the key to the Frogs’ success last season was the summer bonding that took place on a roster that was filled with eight newcomers.

TCU won’t be facing that issue this summer. The Frogs can begin the process of living up to expectations.

We need to get one thing out of the way before getting to the business at hand:

The Kirk Saarloos ejection and subsequent two-game suspension are a joke, and the Big 12 Conference should be ashamed of itself for both.

The idiotic ejection prompted Saarloos to take to the field to plead his case and, presumably, let the umpires know what idiots they are.

Rather than admit the umpire’s mistake, the Big 12 doubled-down with the suspension for not leaving the field in a timely manner.

Big 12 umpiring has been panned all season, not just by TCU. Clean it up.

The selection show is at 11 this morning. TCU missed out Sunday night on hosting a regional, and the latest projection from D1 Baseball has TCU as a No. 2 seed and heading to the Gainesville regional hosted by Florida.

D1 Baseball says that TCU was done in on hosting duties by a lackluster RPI (36th) even though the Big 12 regular-season champion had never not hosted a regionial in the 64-team era.

Mapaya posted the nation’s best leap (56 feet) last week at the NCAA West Regional at Fayetteville, Ark. The senior won the 2019 national championship, finished second last year and third in 2018. He is bidding to become a four-time All-American.

The 400-meter relay team finished third in its heat with a time of 38.89 seconds. The team entered with regional with the second-best time in the country this season (38.50)

There’s only one thing to watch, and we’ll know later today when to watch it. You should also watch Episode 11 of the Frogs Today Show with Brian Estridge (below).

Fantasy flap: For those who were busy watching TCU baseball on Friday, you’re excused for missing this from Cincinnati, where Reds infielder Tommy Pham confronted San Francisco Giants outfielder Joc Pederson over a disagreement over fantasy football.

Pham was still steaming over a transaction Pederson had made and a gif he had sent in a group text that poked fun at the San Diego Padres’ late-season collapse. Pham played for the Padres last season before hitting free agency.

The story is unbelievable, but both players confirmed it. Pham was suspended three games for slapping Pederson during batting practice and seemed proud of it, saying he had to do what he had to do. He also said that Pederson was messing with his money and that he’s a high roller at multiple Las Vegas casinos.

Pham made news during the COVID shutdown when he told USA Today that he needed games to start so that he could get paid after splurging $300,000 on a Bentley and leasing a penthouse suite in downtown San Diego. Not mentioned? Any gambling debts.

Anyhoo, the story is so ridiculous. Pederson, though, was a gem in telling it and then showing the gif to the media Saturday. Watch below.

Joc showed up with receipts of the fantasy football group chat with Tommy Pham, which included a GIF making fun of the Padres last season pic.twitter.com/rCYbFRdwA8

Surfer … dude!: The 1972 movie the Poseidon Adventure scarred me for life upon seeing it in the 1990s as an adult. I was never a big fan of oceans, but seeing that fake wave capsize a cruise liner swore me off cruises. I should have known the boat was in trouble when I saw that Frank Drebin was the captain.

Sebastian Steudtner probably saw the movie and wanted to surf the wave.

Steudtner is a German surfer who specializes in monster waves. He was just crowned the Guinness world record holder for biggest wave surfed at 86 feet in 2020 at Nazare, Portugal. He says that his extreme sport is relatively safe because he knows of only a few deaths and spinal-cord injuries.

Apparently, 86 feet is nothing. There’s video of him surfing a 115-foot wave, though it hasn’t been confirmed by Guinness. It is confirmed that watching the video below scared the crap out of me.