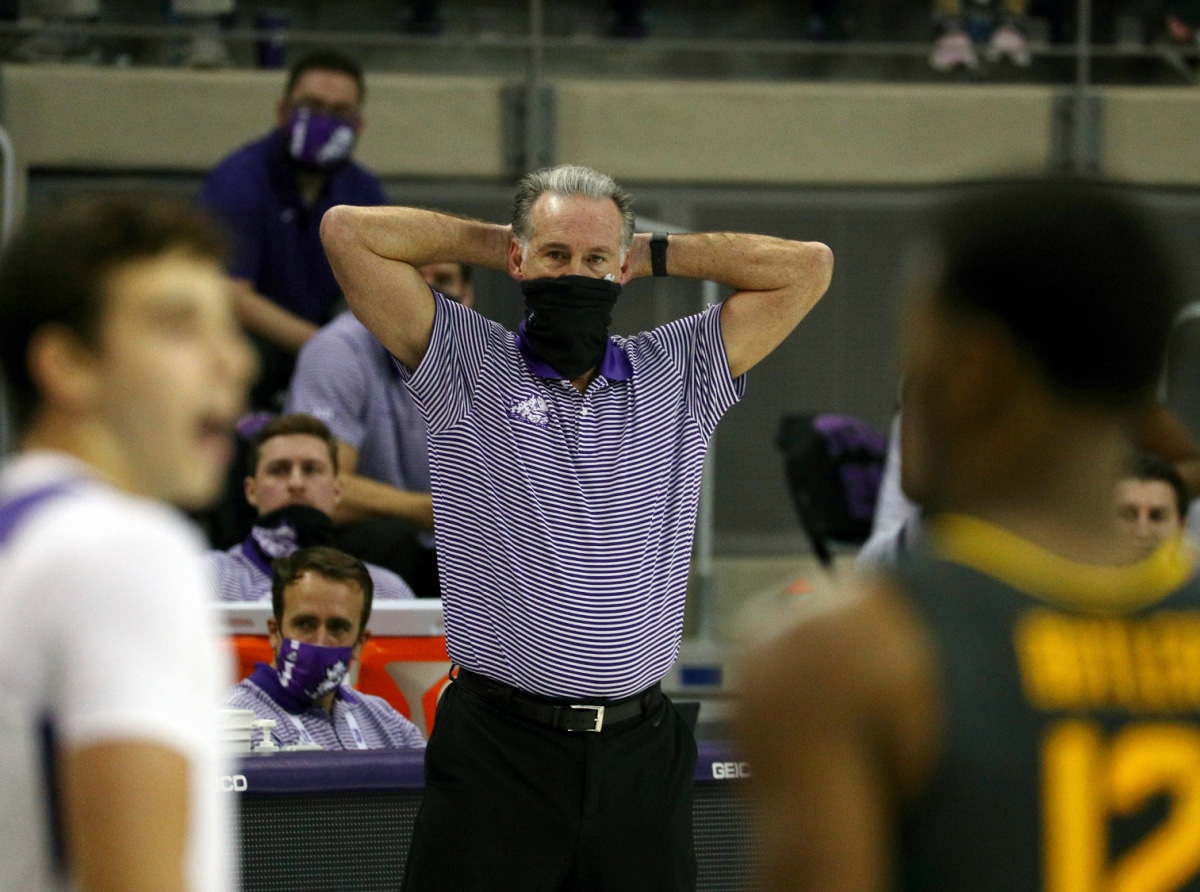 Jamie Dixon and the TCU men’s basketball team could have a smoother road the rest of the season if the Big 12 adopts the CDC’s latest guidelines (The Associated Press/Richard W. Rodriguez).

FORT WORTH — Happy New Year from Frogs Today. We hope everyone was safe Friday night and not too hungover Saturday morning and afternoon.

Though taking our first steps, we’re old enough to know that New Year’s Eve is for the amateurs. It’s best to go to bed early and relatively sober, especially with a long day of football watching in front of us.

We’re also old enough to know not to mix politics with our sports coverage, and we’re not doing that here. But a government agency is making us toe the line on that.

The CDC has cut in half the quarantine period for those who test positive for COVID-19, from 10 days to five. What does that have to do with TCU sports (and bowl games)? Well, a lot.

The TCU men’s basketball team has had to cancel or postpone three games, including Saturday’s Big 12 opener at Kansas and the game vs. West Virginia scheduled for tonight, because of an outbreak.

They had to do that, in accordance with conference safety policies, despite being 100% vaccinated and wearing masks and being on high alert with the Omicron variant spreading rapidly. Those who were positive were either asymptomatic or had mild symptoms.

The women’s team lost three games, one against UC Riverside because of COVID racing through the Frogs and two as opponents Davidson and Kansas for the Big 12 opener were sacked with COVID.

Having not played since Dec. 12, TCU found an opponent Sunday. It was SMU, which had its American Athletic Conference opener delayed as East Carolina couldn’t field a team. SMU won 79-53.

The men haven’t played since Dec. 21, and the soonest they will play is Jan. 8 against Baylor. That’s too much time off and too many short-handed practices to not have an adverse effect on a team.

The Big 12 is considering adopting the CDC’s new guidelines, which would make things easier on teams going forward. It won’t help TCU now, and both teams hope they have gotten their COVID outbreak out of the way for the rest of the season, but fewer games would be postponed with a shorter quarantine mandate.

However, just as quickly as the CDC changed, there was immediate blowback and a push that a negative test should be required before someone can leave quarantine. That could be implemented in the coming days, according to Dr. Anthony Fauci.

The tenor is changing on COVID as political winds shift. One side has been against mask and vaccine mandates, and has been arguing that total hospitalizations, not cases, is how COVID’s severity should be treated. The other side is now starting to move that way, because it’s more popular with voters.

Who knows where this will be in a week or two, but it seems like a key change that the TCU basketball teams could have used the past week is on the horizon.

• So far this bowl season, the Big 12 has gone 4-2 with one game to go Tuesday as Kansas State plays LSU in the Texas Bowl. Among the Ws are New Year’s Six wins in the Fiesta Bowl (Oklahoma State 37, Notre Dame 35) and the Sugar Bowl (Baylor 21, Ole Miss 7). The four wins are fourth-most among all FBS conferences.

• Also among the wins was Oklahoma’s 47-32 triumph over Oregon in the Alamo Bowl in the Sooners’ first game since coach Lincoln Riley bolted for USC. There has been rampant speculation that freshman quarterback Caleb Williams will follow? If he does, it would put the Sooners in a bind. Williams took over for Spencer Rattler in the comeback win over Texas. Rattler has already transferred to South Carolina. Williams didn’t do anything after the bowl game to squash any rumors. “I’m going on vacation with my family next month,” he said. “I’m focused on that.”

• The Baylor men won 77-72 on Saturday at Iowa State in a game featuring two unbeatens and two top-10 teams. The victory will keep the Bears, the defending national champions, a unanimous No. 1. Iowa State was picked to finish 10th in the 10-team Big 12 in preseason rankings. TCU was picked to finish eighth, and Baylor was third behind Kansas and Texas.

If you read my Texas Rangers Newsletter, then some of what follows might sound familiar. Apologies if so, but there is a TCU hook to what transpired last week as well.

By now many of you are aware of the wildfires in Colorado, east of Boulder in the towns of Louisville and Superior. Hurricane-force winds and unusually dry conditions made the rolling hills and fields coming off the Flatirons tinder boxes.

Much of Louisville and most of Superior were destroyed. Neighborhoods that existed Wednesday were gone by Thursday night. My aunt and uncle live in Louisville, and their house was spared.

It was a long night for them, having followed the evacuation order in mid-afternoon and not having any way to know if they would still have a place to live.

Homes a quarter-mile to the south were a complete loss.

TCU opens the 2022 football season Sept. 2 at Colorado. Most Frogs fans who will travel to the game will pass through Superior and Louisville on their way to Folsom Field in Boulder. Some might actually stay in the hotels off Highway 36 in Louisville.

Yeah, it’s nine months away, but there’s no way all that was lost will be rebuilt.

So, at the very least, keep those affected by the fires in your thoughts. If you’d like to help them get back on their feet, here’s how to do it.

Each and every one of us can always use a laugh. Enjoy. See you next week.

Bad golf shots: I laughed hysterically at this poor chap, in part because I’ve been right there with him. Don’t lie. So have you at some point.

Brown out: Antonio Brown flipped what was left of his lid Sunday in Tampa Bay’s eventual win over the New York Jets, stripping down to just his football pants and running into the end zone before leaving the field in the third quarter. That should be his final act as an NFL player — it’s definitely his final act for the Buccaneers, according to coach Bruce Arians — but some team will give him another chance. He’s a pretty darn good receiver.

Arians said that Brown was asked to enter the game but refused, at which point Arians told him to hit the bricks. Brown did so, spectacularly. If you didn’t see it, here’s some of it.

A tribute to Coach Madden: John Madden, the Pro Football Hall of Fame coach and broadcaster and the man whose video game has contributed to many flunked final exams, passed away last week at age 85. As has been said many times since, when he and the late Pat Summerall were calling a game, it was a big, big deal.

No one does a Madden (or Summerall) impersonation quite like comedian Frank Caliendo. Here’s one from this season. It’s a good one to go out on.