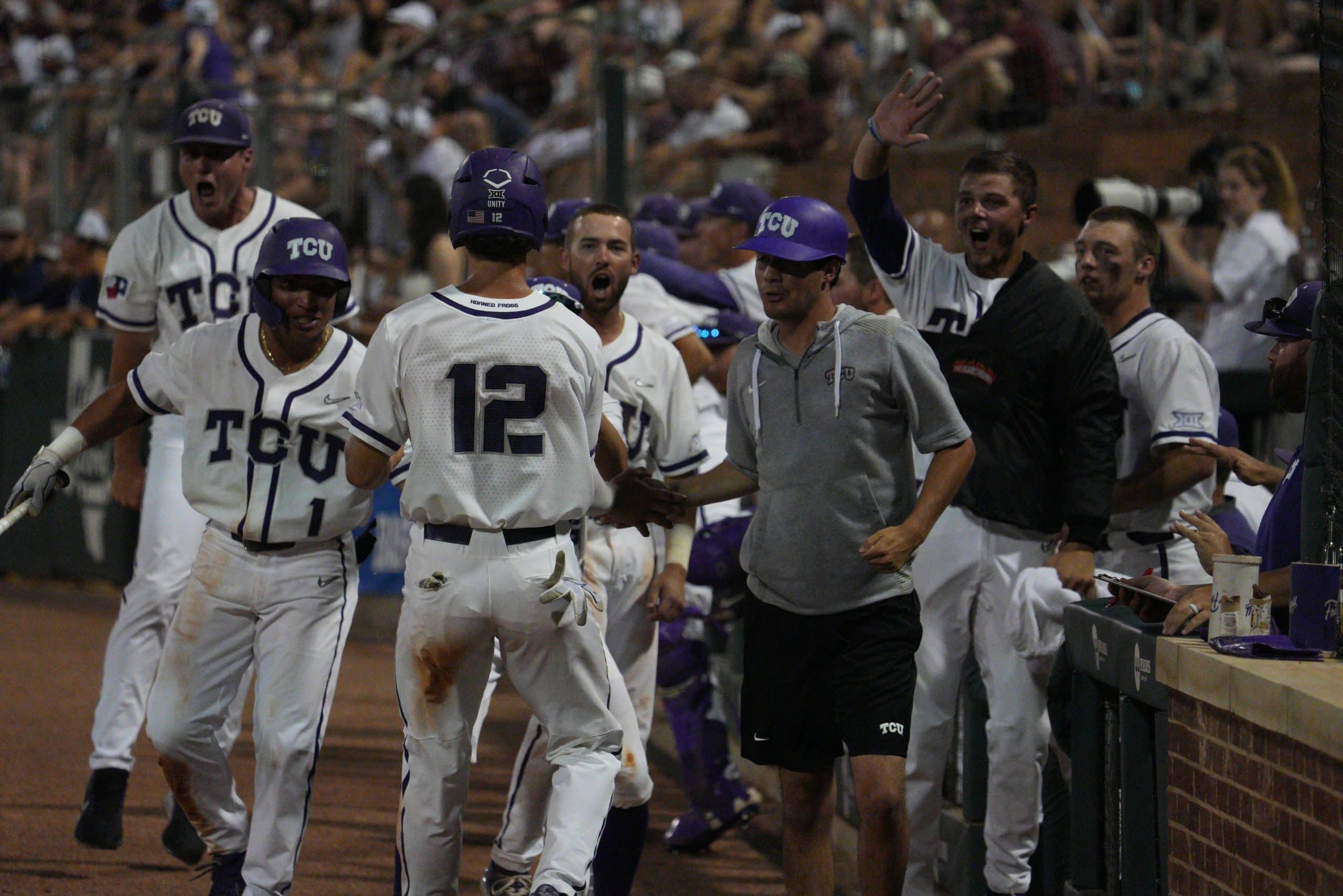 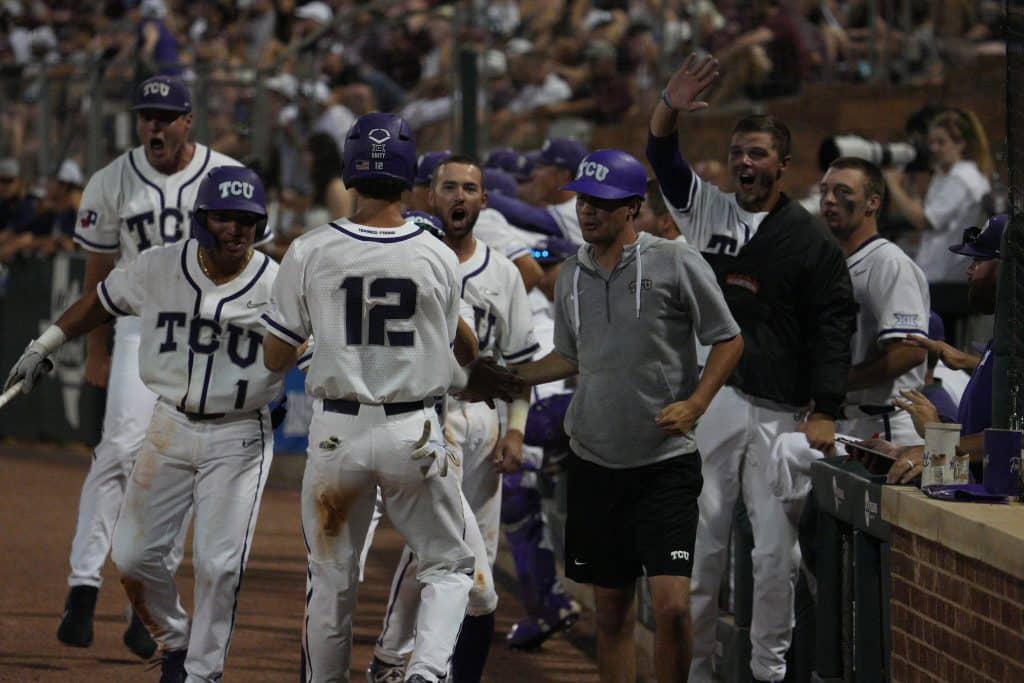 Tommy Sacco gave TCU a 9-8 lead Sunday night in the eighth, but Texas A&M stormed back and ended the Frogs’ season (TCU Baseball).

Make no mistake that TCU exceeded expectations this season, winning the Big 12 Conference regular-season title after being picked to finish fourth in the preseason.

The Horned Frogs did it with their best pitcher injured and with a pitching staff that changed from weekend to weekend, or so it seemed.

Yet, after the Frogs’ season ended Sunday night at the hands of former coach Jim Schlossnagle, there was a sense of disappointment.

And not just because of the way they were eliminated from the College Station regional, 15-9, after leading Texas A&M 3-0 after five innings and 9-8 entering the ninth.

The final two weeks of the season put a dent in the campaign. The Frogs bowed out early from the Big 12 tournament, which cost them a chance at hosting an NCAA regional and sent them to College Station as a No. 2 seed.

TCU didn’t do enough Friday to beat No. 3 seed Louisiana, then had to make its way through the loser’s bracket just to get to Sunday night.

And things were going so well for the five innings against Texas A&M. Just as quickly things went south as the Frogs fell into a 7-3 hole in the seventh. But just as quickly hings  up again as Brayden Taylor tied things with a three-run homer.

Tommy Sacco connected for a two-run homer in the eighth to put the Frogs three outs away from a winner-take-all game Monday.

But a bullpen running on fumes fell apart in the ninth. That’s the pentalty that comes with a tour through the loser’s bracket.

Of course, it would have taken two victories over the Aggies for the Frogs to extend their season. The pitching staff was running out of bullets, but it would have been nice to make the Aggies sweat Monday night.

As the Frogs reflect on what went wrong at the end, it shouldn’t overshadow all that went right. That list starts with a second straight regular-season crown and includes terrific performances from Sacco and Taylor, and breakthrough performances by Riley Cornelio, David Bishop and Kurtis Byrne.

Austin Krob’s performance Sunday night (five innings, one run) made the Frogs wonder what might have been had the preseason All-American been healthy.

There are several questions facing the Frogs as they move into the offseason, headed by who will be back in 2023. Krob and Cornelio, who also dealt with an injury and struggled late, are draft-eligible but might be better served returning to the Frogs and bolstering their draft status.

If they’re back, things get easier for coach Kirk Saarloos and staff in the offseason.

No doubt they’ve already contemplated the possibilities and have to wait for things to play out next month in the MLB Draft.

In the end, they will look back and find more positives than negatives on the season.

The last two weeks, though, will be tough to swallow.

Anyone who thought Frogs Today was a fly-by-night operation needs to pay attention here. We’ve hired another writer.

David Beaudin, most recently the football coach at Nolan Catholic in Fort Worth, will be putting his football expertise to us in a variety of ways, a few of them new to TCU coverage.

In addition to writing, he will take recruiting coverage to a new level by explaining how a recruit will fit into the program schematically and will also be breaking down game film to explain the game to folks like me who know very little about x’s and o’s.

Frogs Today is going to be a TCU fans one-stop shop for football coverage, with Jamie Plunkett, Melissa Triebwasser and me also part of the coverage team — at home and on the road (I’ve already called dibs on the Colorado and West Virginia games).

Mapaya and the 4×100 team are contenders to be national champions.

The punching bag is back:  No one can accuse me of not being a team player.

The butt of most Frogs Today jokes, though glad to do it for the good of the program, I was coaxed into performing leg kids with five incredibly kind and patient members of the TCU Sh0wgirls for the latest edition of the Frogs Today show with Brian Estridge.

I’m 47 and as flexible as you might expect. It took me a few to get warmed up, but kicks 4-7 are pretty good. I also started an eighth, a clear faux pas.

Some pretty good insight was gleeened from the Showgirls. They practice three days a week on top of performances. It’s like a part-time job, one they do very well and should come with compensation.

Classic country greatness: No one has asked, but I’m sure you’re all wondering, “Hey, Jeff, what is your favorite classic country song?”

The answer is El Paso by Marty Robbins, who sang tales mostly about cowboys and outlaws. He also contributed to Chuck Morgan becoming the Rangers’ public-address announcer in 1983.

Morgan was a well-known DJ in Nashville and became close friends with Robbins through the years. Robbins would often come to the studio late at night when he was unable to sleep because of insomnia.

Robbins passed away suddenly in December 1982 not long after Morgan had started working some games at Triple A Nashville.

With his friend gone and an offer to move to the major leagues, Morgan left Nashville for the Rangers.

Not quite the west Texas town of El Paso, but next door to Where the West Begins.

Check out El Paso (or part of it) below.

Bad golf shots: Unless you play golf really well, you probably shouldn’t do this. Enjoy. See you next week.