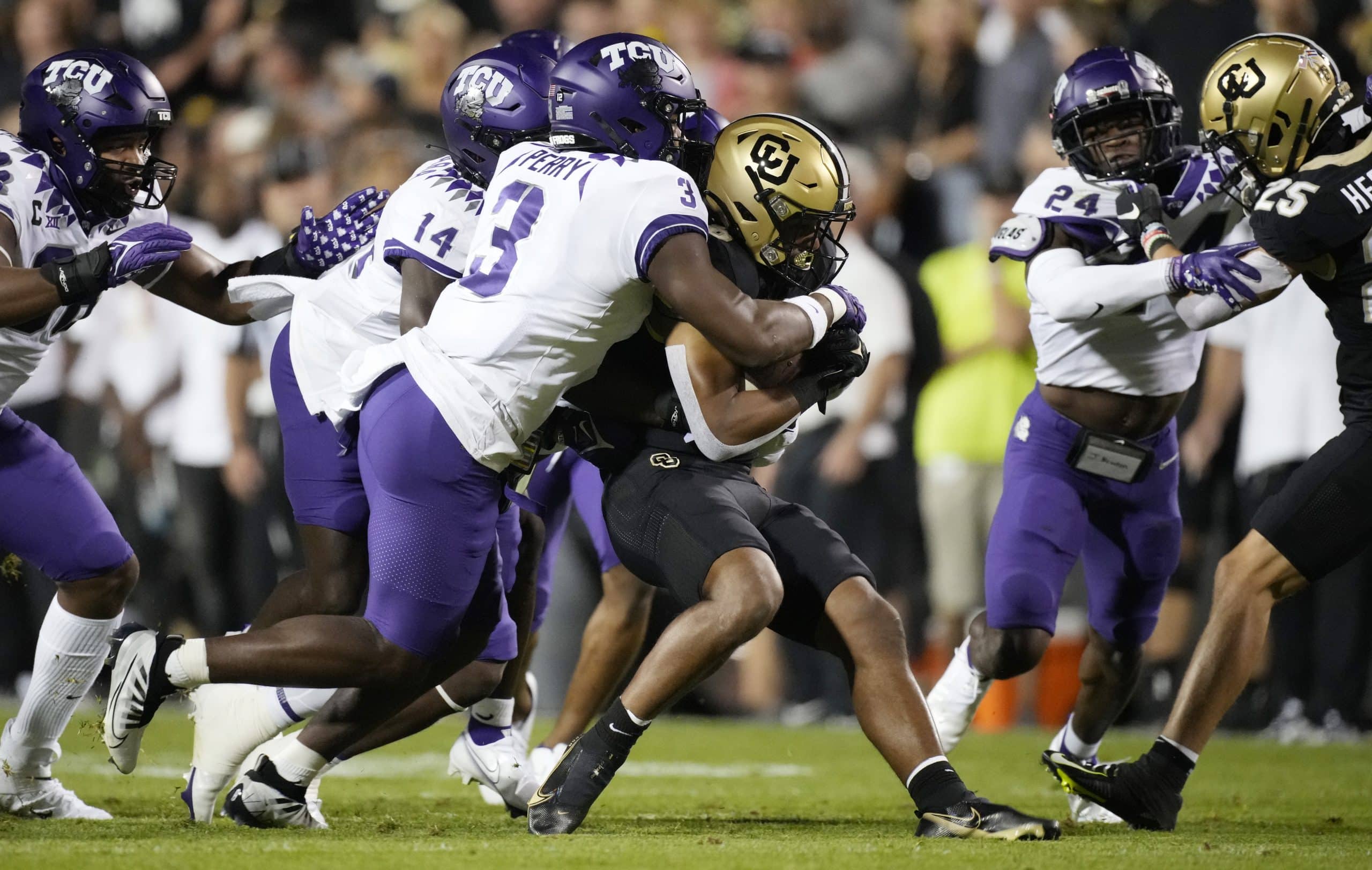 Frogs Today weekly newsletter: Is TCU football good? It may be a few weeks before we know

Home » Frogs Today weekly newsletter: Is TCU football good? It may be a few weeks before we know 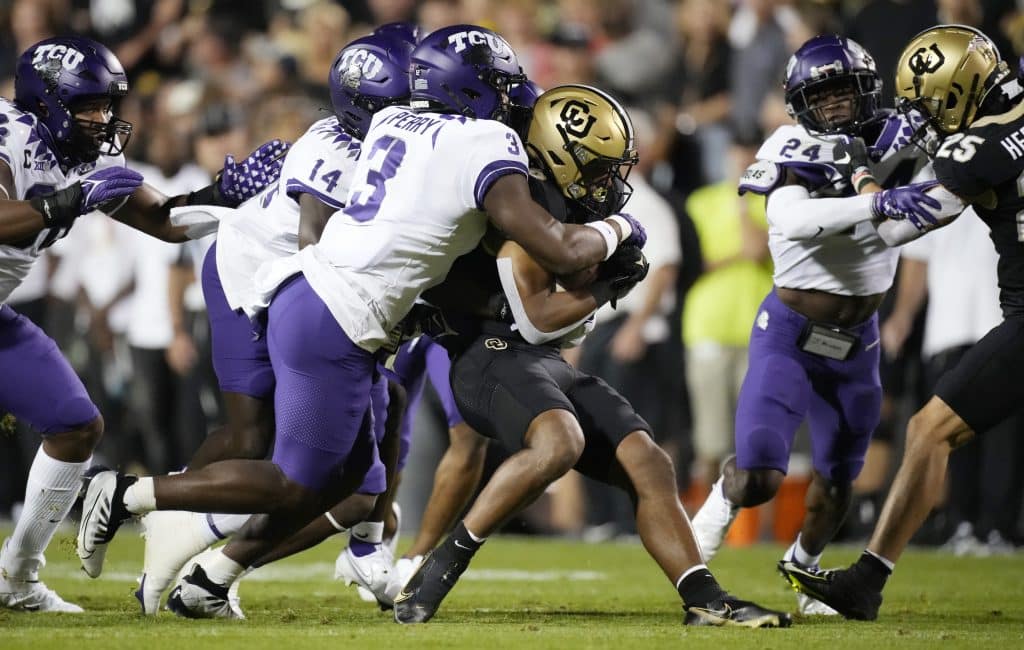 Mark Perry helped lead the TCU defense in the season opener against Colorado, which struggled on offense (The Associated Press/David Zalubowski).

FORT WORTH — For a little further insight into the how unimpressive Colorado was Friday night and is thought to be this season, let’s check in with the folks who always seem to know what’s what in college football — gamblers.

TCU opened as a 6 1/2-point favorite over Colorado, and the line jumped to 14 by kickoff. TCU easily covered, though it was hairy in the first half.

Colorado plays at Air Force this week, and opened as 13 1/2-point underdogs. Within hours the line had jumped to Air Force -17.

The Horned Frogs, meanwhile, are 37-point favorites Saturday in their home opener against Tarleton State, which would likely be underdogs against Colorado.

This isn’t the tough part of the Frogs’ schedule, in other words. They did have to deal with the unexpected at Colorado, including a lightning delay and a hostile student section at Folsom Field. There was the injury to starting quarterback Chandler Morris, as well.

Coach Sonny Dykes was pleased with how the players handled it all, showing some maturity under a first-year coaching staff.

Tarleton State is going to have its moments at Amon G. Carter Stadium, but the Texans ultimately will be another pushover. Then, TCU has an open date before the schedule starts to show some teeth Sept. 24 at SMU in what is sure to be an emotional game for the Mustangs.

That will be the first test and the first chance to see how good this TCU team might be.

The Mustangs’ offense will test the Frogs’ defense and the new 3-3-5 scheme. The SMU defense will have an understanding of what TCU will do on offense, after facing it in practice the past four seasons while Dykes was the coach there.

If Morris is healthy and plays, the offense’s rhythm could be affected in a third straight game without the same starter at QB. While TCU should be mostly healthy, coming off an open week might also lead to some hiccups on offense and defense.

Tarleton State should allow the Frogs to correct some of what slowed them against Colorado. Plus, more reps should get the Frogs clicking better.

After this weekend, there isn’t much letup the rest of the season.

I was trying to sort through what to highlight here, and there was so much that I figured I’d borrow from what I do in the Rangers Today newsletter. We just finished Labor Day weekend, so it’s understandable if some TCU stuff sneaked past you. Don’t worry. Frogs Today has you covered. Here’s our latest, in case you missed it.

Hair of the Frog: Boulder edition

Stars from the Colorado win

We had plenty of questions about how TCU Football would look under Sonny Dykes. We’re starting to get some answers. https://t.co/8GD3NNlqKc

Before we get to the TCU events to watch or follow from afar this weekend, here’s a friendly reminder to subscribe to the Frogs Today YouTube channel and also follow Frogs Today on Twitter. That’s where we notify everyone about our latest videos. The biggest fish this week is the debut episode later today of Dykes’ coach’s show, called The State of the Frogs. It’s crazy all that we’re doing.

Frogs fall sports are picking up, too.

The first edition of “The State of the Frogs” with ⁦@CoachSonnyDykes⁩ drops tomorrow night on ⁦@frogstoday⁩ Enjoy! pic.twitter.com/H4mPuA9qmJ

LS-eeeew: The Brian Kelly era at LSU got off to not-so-special start. Yeah, that’s a play on the special-teams miscues that cost the Tigers in a 24-23 loss to Florida State.

The game ended when the Seminoles blocked an extra-point try that would have tied the game and forced overtime. That wasn’t the only mistake the Tigers made. They saw a 30-yard field-goal try blocked and muffed two punts.

As called on FSU radio by @jeffculhane & heard on the @varsity app: pic.twitter.com/o79iWgitW8

On top of that, one of LSU’s starting defensive linemen blew out his knee while celebrating a tackle. Another was flagged for the most blatant targeting call in history.

Kelly was coaching is first game at LSU after leaving Notre Dame in the offseason for a contract that will pay him more than $100 million over 10 years. That should help soothe the pain some.

Groundhog video!: I thought this one was funny. It also made me curious.

It appears as if the groundhog, Chunk, is someone’s pet. Is that really a thing? It is with these people, who let Chunk and some of his family roam around their house.

It never gets easier, dude @foreplaypod