Frogs Today weekly newsletter: A long quarterback battle might not be the worst thing

Home » Frogs Today weekly newsletter: A long quarterback battle might not be the worst thing 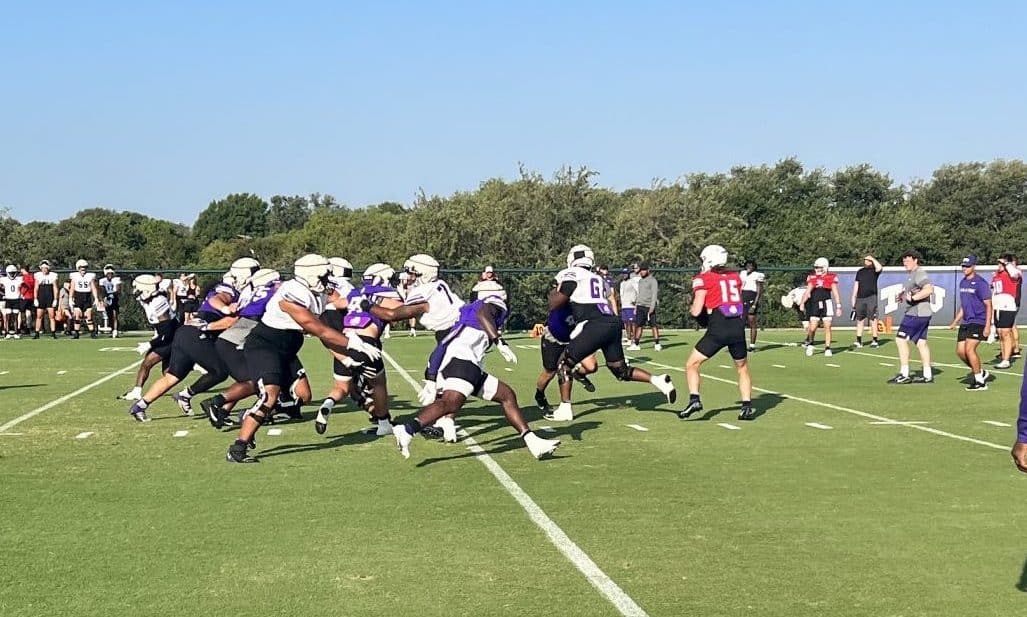 Max Duggan and Chandler Morris are still battling it out to be the starting quarterback  (Frogs Today/Jamie Plunkett).

As coach Sonny Dykes warned before camp opened, reporters shouldn’t be reading too much into which quarterback is the first to work with the first-team offense each day. Asked Wednesday for some clarity into the battle, Dykes wasn’t even sure who had been working with which group.

For the record, it’s been senior Max Duggan taking the first snap most often, though not exclusively.

While Sam Jackson has impressed, it doesn’t appear as if he’s turned the two-man battle between Duggan and fellow redshirt freshman Chandler Morris into a three-man race.

Dykes also said something else that could be revealing: He could see the Horned Frogs using both quarterbacks in a game.

He is fully aware of the adage that having two quarterbacks means a team has no quarterback, but he said that might not be the case here.

Duggan and Morris are getting the ball where it needs to go, and both are capable runners. But there are things that each does better than the other in the offense, and that could lead to both getting playing time.

Jackson is likely to be on the field in what has been dubbed the “Wolfpack” package.

Whoever ends up as the starter might only be the starter in title. In baseball, a leadoff hitter might start an inning only once in a game. Duggan might be the starter, but could share snaps with Morris the rest of the way.

I can hear some groaning, and I get it. But also consider this: Both quarterbacks were injured last season, and they way they play lends themselves to getting hurt.

It won’t be a terrible thing if they both play or if the competition drags on for another week, in case something terrible happens to one of them during the season.

The football team scored another commitment for the class of 2023 over the weekend, as linebacker Max Carroll gave the Frogs his verbal pledge.

He is from Memphis and was recruited by running backs coach Anthony Jones before he left the Memphis Tigers for TCU.

While Dykes stressed in his introductory news conference the need to recruit the Metroplex, the program is reaching outside of DFW and the state. Carroll is the third non-Texan, joining offensive lineman Cooper Powers from California and defensive end Jonathan Bax from New Orleans.

The Frogs went to California for the class of 2022 and found nose tackle Damonic Williams, who has been one of the early stars of camp, and to New Orleans for cornerback Ronald Lewis. They also found junior-college transfers in Iowa (cornerback Namdi Obiazor) and New York (nose tackle Doug Eli-Blue).

The men’s basketball team is also casting a wide net, but early on has landed only Isaiah Manning from Mansfield Legacy for the class of 2023.

It’s about to get real this week, as the No. 7 ranked women’s soccer team opens its season at 7 p.m. Thursday against Wisconsin and faces Minnesota at 7 p.m. Sunday. Both games are at the Garvey-Rosenthal Soccer Stadium.

The women’s volleyball team is off to South Carolina to play an exhibition match at 5 p.m. Friday against College of Charleston. The Frogs open their season Aug. 26 at home against Wisconsin, the defending national champs.

On the Frogs Today front, Frogs Today Daily, brought to you by Dave’s Hot Chicken, will continue cranking out shows from football practices.  Meet the Frogs is scheduled for Saturday from noon-2 p.m. at the Sam Baugh Indoor Facility. Click here for more information.

An early win for Kentucky football: I’m not here to say that what Kentucky men’s basketball coach John Calipari said last week isn’t true. Kentucky is a basketball school. He just shouldn’t have said it, nor should he have said, “No offense to our football team.”

But he did, as he was whining for a facilities upgrade, and it didn’t go over very well with football coach Mark Stoops. Seeing the comments on Twitter, Stoops fired off the following tweet.

Basketball school? I thought we competed in the SEC? #4straightpostseasonwins https://t.co/xUoKmUeonH

And he said he would never apologize for defending his players and coaches.

Calipari, though, did apologize to the football program.

That’s a quality win for Stoops.

Nolan Ryan appreciation post: Ricky Cobb with the Twitter account @Super70sSports is a big Nolan Ryan guy. It seems like hardly a week goes by without Cobb paying homage to the all-time strikeouts leader and a member of the National Baseball Hall of Fame.

He’s in the Rangers Hall of Fame, too, but didn’t attend the Hall of Fame ceremony over the weekend as Ian Kinsler and PR man John Blake were inducted. Ryan did, however, make an appearance on the video board.

Ryan’s three kids all went to TCU, and he attended two men’s basketball games last season. I bet he checks out the 2020-23 Frogs, too.

Anyhoo, back to the Super 70s Sports tribute. This is a good one.

Nolan Ryan’s ERA was 3.09 the year the White Album came out. It was 2.91 the year Nirvana released Nevermind. pic.twitter.com/uwEeF6mu5p

Bad golf shots: I would love to have the chance to hit this shot at Augusta National. Enjoy.