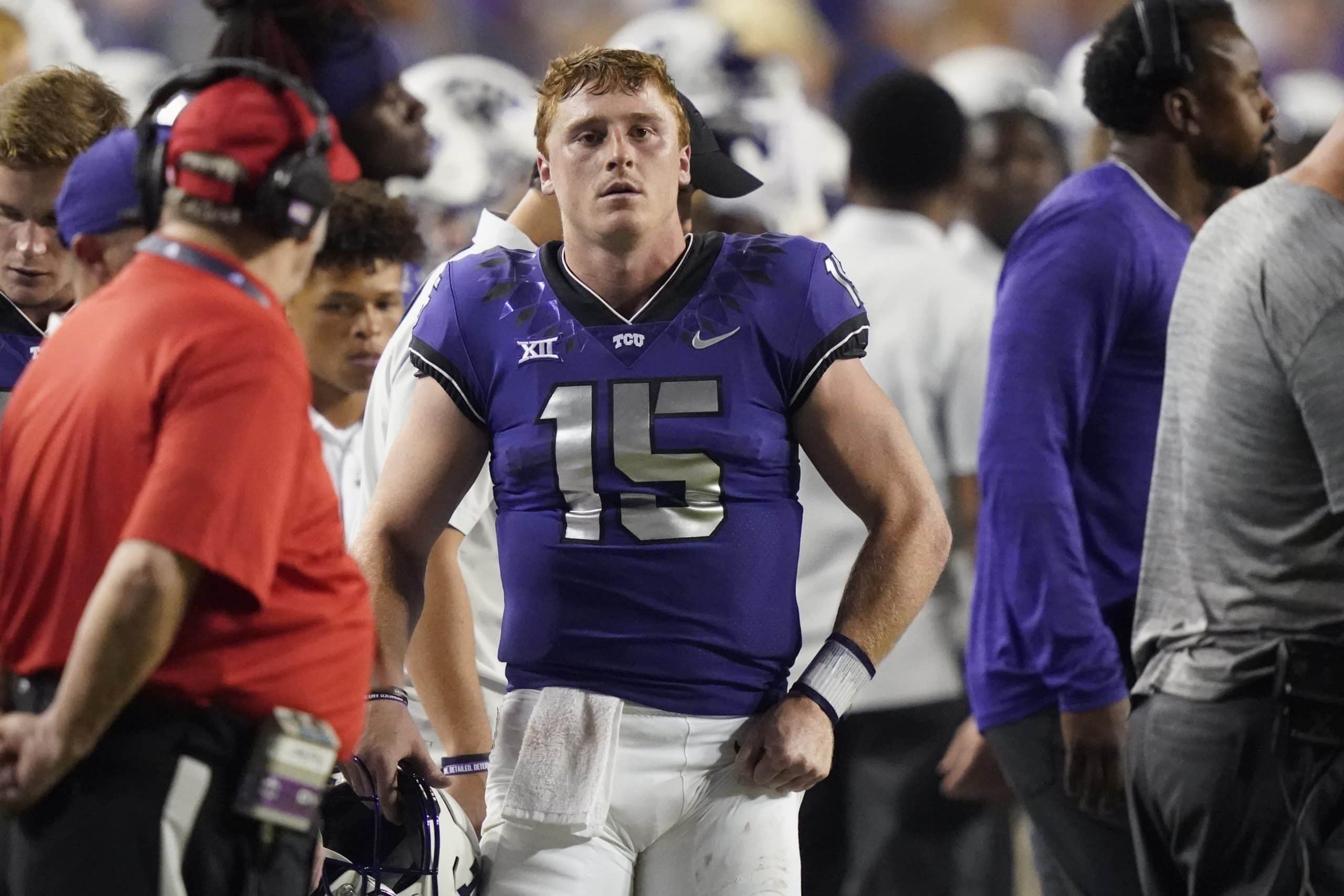 By Jeff WilsonOctober 1, 2022No Comments 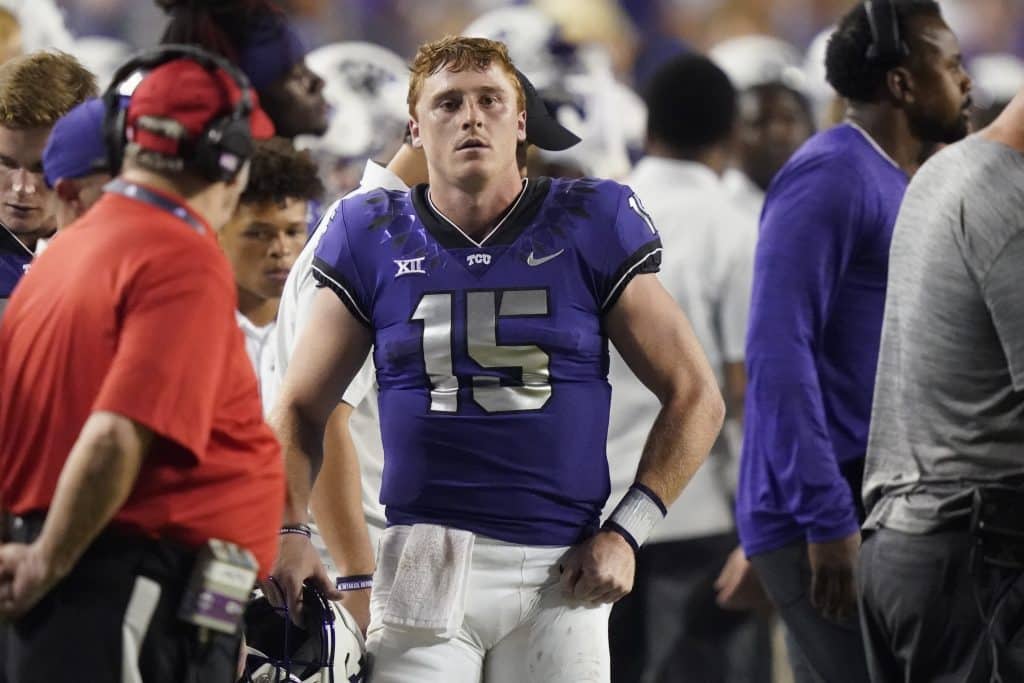 TCU quarterback Max Duggan could do some damage with his legs against Oklahoma (The Associated Press/LM Otero).

FORT WORTH — College kids aren’t the kind who like to get up early, but TCU’s football players are the exception.

They have been waking up early ever since coach Sonny Dykes was hired, like 5 a.m. early. The Horned Frogs would actually rather play at 11 a.m. than 7 p.m.

So, Oklahoma might have done TCU a favor by losing last weekend to Kansas State. A win would have left the Sooners and Frogs unbeaten and their matchup ideal for prime time.

Get the mimosas and Bloody Marys ready.

But the loss has TCU believing that the Sooners will have some extra motivation.

Despite the loss and being on the road, the No. 18 Sooners are favored by as many six points. They have a high-powered offense capable of big plays, and they have a talent advantage over the Frogs.

The Frogs Today staff is also undefeated, having correctly picked TCU to win each of its first three games. There will be separation after this week.

Here are our predictions:

Jeff Wilson: New coaching staffs, new systems, new questions. TCU and Oklahoma won’t look like they have the past few seasons, which adds to some difficulty predicting what’s going to happen at Amon G. Carter Stadium. The players are largely the same, so there’s some familiarity there. Oklahoma quarterback Dillon Gabriel is no stranger to TCU defensive coordinator Joe Gillespie, who played at Central Florida the past three seasons while Gillespie was running Tulsa’s defense in the American Athletic Conference. Tulsa had some success, too. TCU’s defense is more talented than what Gillespie had then, but the Horned Frogs are still ironing things out. The same can be said for the Oklahoma’s defense, which was awfully porous last week. Max Duggan has a chance to do some damage on the ground, but he needs to complete a few passes early to open things up. The offensive line also must do better than it did last week. Tough call here. TCU 38, Oklahoma 37

David Beaudin: Oklahoma coming off a loss does not bode well for the Horned Frogs. However, it looks like new coach Brent Venables tried to squeeze the 10 years of defense that he installed coordinating the Clemson Tigers into the first four games with the Sooners. These things take time, and the rush to be “multiple” in Oklahoma led to some uncharacteristic busts in the loss last week to Kansas State. All of this will amount to the Sooners’ defense scaling back, which is all relative when you are talking about a Venables defense. The Frogs will score some points in this one against a somewhat vanilla version of this defense, but the Sooners offense is going to score, too.  Offensive coordinator Jeff Lebby has reunited with quarterback Dillon Gabriel from his days with Central Florida. In spite of some shaky deep throws, Gabriel still threw for four touchdowns in last week’s loss and is more than capable of leading his team to victory against any Big 12 opponent.  But this won’t be the week. TCU outscores the Sooners in a thriller at home. TCU 43, Oklahoma 38

Melissa Triebwasser: This game has ended in heartbreak more often than not for TCU fans since the Horned Frogs joined the Big 12. Outside of the electric 2014 victory, the Frogs are o-for-Oklahoma for the better part of the last decade, and I don’t see Saturday as the game to break that trend. Though the Frogs showed some encouraging signs on the road at SMU, there are still some bugs to work out on both sides of the ball. A stagnant offensive second half and some big plays given up by the defense could leak into this weekend, and Oklahoma is far more well-equipped than the Mustangs to take advantage of any mistakes. To me, the biggest concern protecting Max Duggan, as the offensive line has allowed a concerning 1.67 sacks per game against three teams not exactly known for their defense. They will also need to get the much-anticipated big game out of Quentin Johnston, who has been corralled by opposing defenses thus far this season. Can the Frogs beat the Sooners for the first time since 2014? Absolutely. Will they? I am less confident in that. Oklahoma 42, TCU 30

Jamie Plunkett:  We heard from linebacker Johnny Hodges on Tuesday, and he said the defense was working on a couple of blitz packages and a couple things we haven’t seen yet this year that TCU is going to debut against Oklahoma. That’s pretty typical this time of year. When a team gets into conference play and starts to face some of these tougher opponents, you start to mix things up and get more creative. We’re going to see that from TCU. It’s always good to catch a team before its really rolling, and Oklahoma is clearly not rolling right now. Sooners coach Brent Venables still hasn’t figured out that defense quite yet. I think Max Duggan and the TCU offense get rolling really early, and we we the Horned Frogs take it to the Sooners. TCU 45, Oklahoma 40