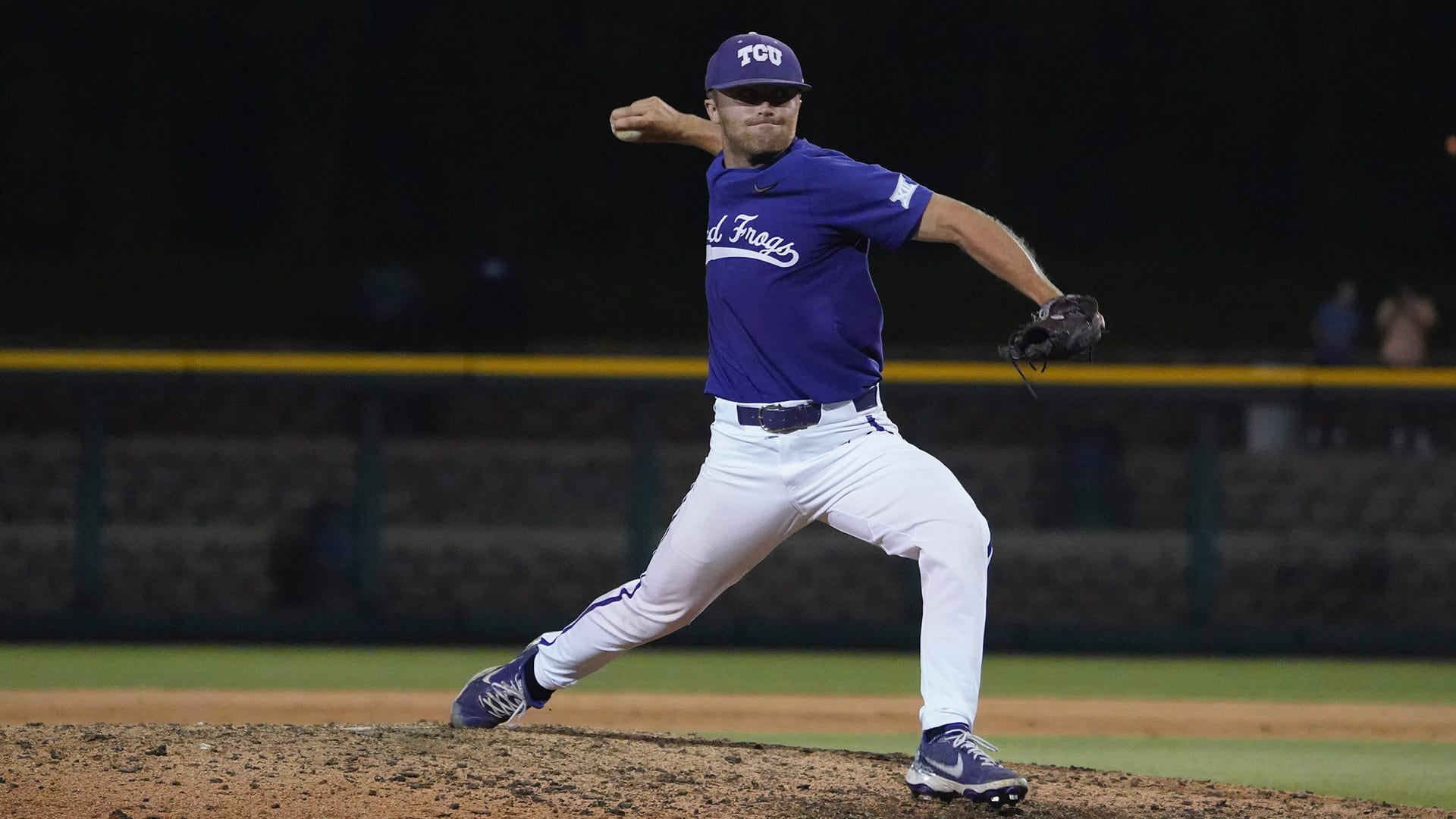 By Jamie PlunkettMay 11, 2022No Comments 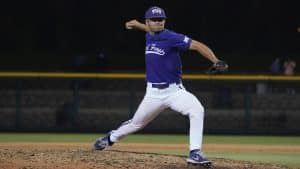 FORT WORTH — David Bishop took a first pitch curveball from Steve Hayward and launched it over the left field wall and into the TCU bullpen, clearing the bases and winning the game with his walk-off grand slam.

It was a signature moment in a great freshman campaign for TCU’s first baseman. Bishop leads the Frogs with 43 RBIs this season, driving in five, all in the ninth inning or later, during Tuesday’s win.

But the season hasn’t been without its struggles for Bishop either. Until Tuesday, Bishop had only one RBI since the start of April, as he dealt with a myriad of issues.

“I’ve had so many hiccups here and there. The hand, the hamstring, being sick, just all these little things that built up,” Bishop said. “When you’re going through a long season it can be pretty taxing and mess with your mind sometimes. So I think that, now that I’m 100% recovered, just trying to move forward from it is the only thing I can do.”

If Bishop is healthy, though, that goes a long way to boosting a TCU offense that has been inconsistent throughout the season. The Frogs held a team meeting after their series loss to Oklahoma,

TCU jumped on top of the Cardinals in the bottom of the first, helped by an error that scored Elijah Nunez. The Frogs pulled out to a 3-0 lead courtesy of Bobby Goodloe’s first home run of the season, a two-run shot to right that scored David Bishop.

Incarnate Word got one run back in the top of the second, when Nixon Brannan singled up the middle to score Wilson Ehrhardt.

TCU extended their lead to 4-1 in the third inning, once again thanks to Goodloe. Goodloe lofted a fly ball into left, deep enough to drive home Brayden Taylor.

Taylor exited the game shortly after scoring, and after the game Kirk Saarloos said it was due to the lingering effects of an illness Taylor had over the weekend.

“Brayden wasn’t feeling 100% again, he was exhausted,” Saarloos said. “You could just see it in his at bats on Sunday, and then today he just has no energy.”

In his absence, Goodloe shifted from second to third, and made several huge defensive plays to keep TCU in the ballgame until Bishop’s heroics sealed the win late.

A three-run fifth inning for Incarnate Word tied the game at four, where it stayed until the eighth inning.

In the top of the eighth Incarnate Word pushed a run across against Brett Walker, giving the Cardinals a 5-4 lead. It didn’t last long, though, as the Frogs responded with two runs in the bottom of the inning, thanks to a triple off the bat of Luke Boyers.

TCU’s lead, similarly, didn’t last long. Austin Krob entered the game in the top of the ninth with TCU holding on to a 6-5 lead. He gave up a leadoff single, then allowed the runner to advance to second with an errant pickoff throw.

UIW’s next batter bunted, and Krob attempted to get the lead runner at third base. While originally called out the runner was ruled safe after a review, giving the Cardinals runners on the corners with no outs.

Two batters later, with the bases loaded and one out, Luke Savage came on in relief. He induced a ground ball to Sacco, who flipped it to Rodgers – who had entered the game when Goodloe moved to third base in place of Taylor – who soared his throw into the UIW dugout. The error allowed two runners to come around to score, giving UIW a 7-6 lead.

That’s where the score stayed until there were two outs in the bottom of the ninth. With Nunez standing on second and an 0-2 count, David Bishop fended off a curveball from Hayward, slapping it into right field. Nunez rounded third and scored, tying the game and forcing extra innings.

While the Frogs waited for Bishop’s heroics, Drew Hill came in to pitch the tenth and eleventh innings. According to Saarloos, Hill had called him earlier in the week asking how he could earn the coach’s trust back. Hill got his opportunity on Tuesday night and made the most of it.

Hill pitched two innings of perfect baseball, striking out three and inducing three ground outs, setting up the Frogs with a chance to win.

With the bases loaded in the bottom of the eleventh, Bishop struck.

Now the Frogs head to Lawrence, Ks. for the final three games of the Big 12 slate. While TCU is fighting for the top spot in the conference, Kansas needs to win all three games just to reach the Big 12 Conference tournament.