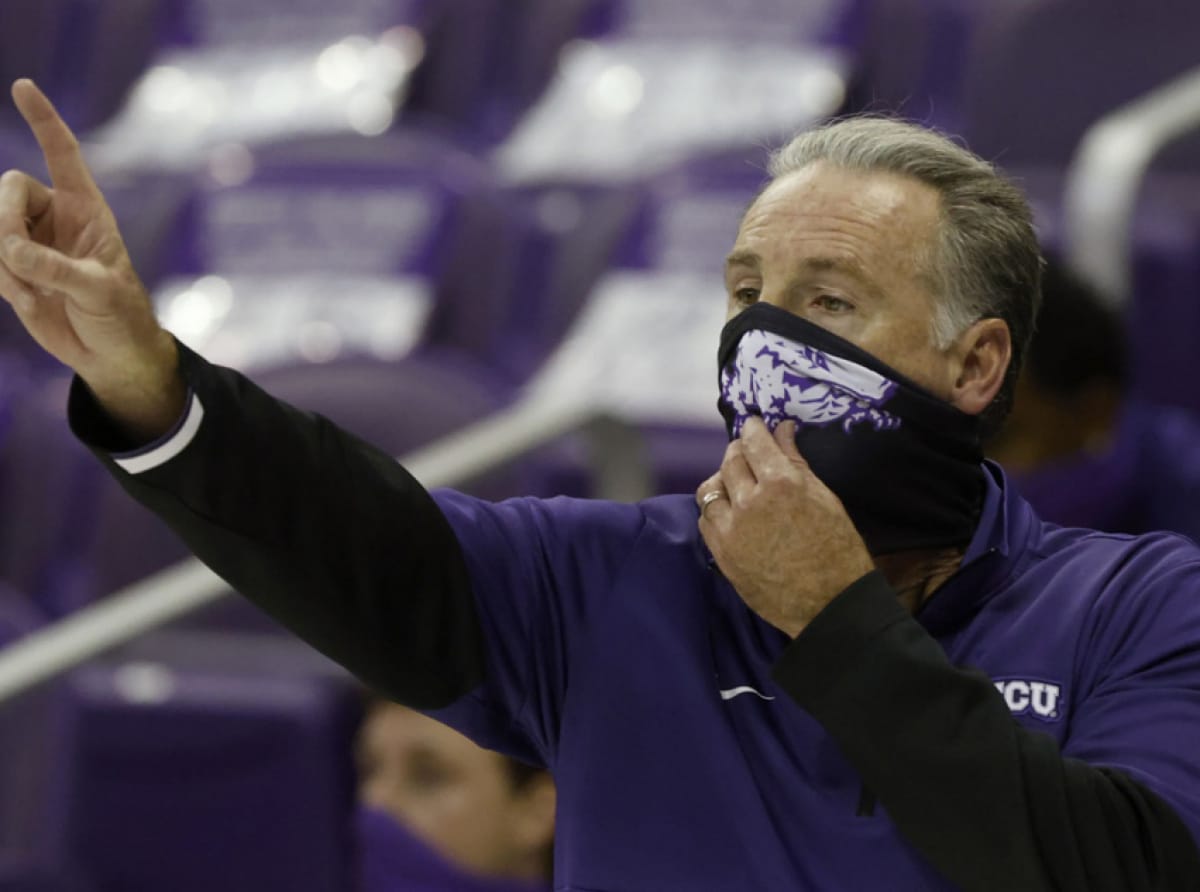 COVID sets in with TCU men, but end of shutdown is in sight

Home » COVID sets in with TCU men, but end of shutdown is in sight Jamie Dixon coached the Frogs through a stoppage-filled 2020-21 season and hopes this current stretch is their only one this season (The Associated Press/Ron Jenkins).

FORT WORTH — The latest surge of the latest COVID-19 variant has put the TCU men’s basketball team on a temporary hold after three games were either canceled or postponed and the start of Big 12 Conference play was pushed back to at least Jan. 8.

The Horned Frogs announced Wednesday morning that their Monday home game against West Virginia will be played at a later date in accordance with conference safety protocols. That postponement comes on top of the final non-conference game vs. Texas Southern being canceled and the Big 12 opener Saturday at Kansas being postponed.

Coach Jamie Dixon said he expects it to be the last delay, as the Frogs’ 10-day required stoppage is tracking to conclude next week. If so, their first game since Dec. 21 would be next weekend against defending national champion Baylor.

“You deal with it the best that you can,” he said.

It’s not all bad news, at least relative to what TCU went through last season with five separate shutdowns based on the additional layer of a close-contact protocol.

Currently, though, TCU can’t meet the minimum roster requirements under the conference’s COVID policies — six scholarship players, one coach — to play a game even though the Frogs are 100% vaccinated.

Dixon said the positive players are either asymptomatic or have mild symptoms, which will help them return to full speed sooner. Some coaches also have COVID-19, Dixon said, and the Frogs are missing two players with injuries.

TCU practiced with five players Tuesday and Wednesday, “and one of them was kind of hurt,” Dixon said. The sessions have been heavy on individual drills and shooting, with some 5-on-0 work, walkthroughs and watching film.

Players who are positive are not allowed inside the basketball facility and are not permitted to work out on their own.

But because the surge hit the Frogs essentially at the same time, shortly after returning from their Christmas break, Dixon is optimistic that the players who are positive will return at the same time or within close proximity of each other. That would allow the Frogs (10-1) to string together multiple practices at full strength heading into the game against No.1 Baylor (12-0).

He said that last season the Frogs entered multiple games with as few as just one practice.

“Last year if you had one guy out, you’re out with contact,” Dixon said. “The good thing about this year is we have a lot out at the same time, so we’re hoping this is the only time.”

So, this stretch isn’t as bad as last season, but …

“It depends on how you look at it,” Dixon said. “A lot of people in the world have it worse. Let’s put it that way. You can’t do much about it.”

The Big 12 is considering a reduction of the 10-day quarantine for positive players to five days in accordance with the CDC’s update of its COVID-19 guidelines. The NFL and other NCAA conferences have made the adjustment.

Dixon said that the Frogs would still be within the 10-day shutdown even if the Big 12 changes course.

And just because TCU could be getting its COVID shutdown out of the way doesn’t mean there won’t be other games postponed as other Big 12 teams go through their own stoppages.

“I would anticipate a number of them being canceled with other teams,” Dixon said.