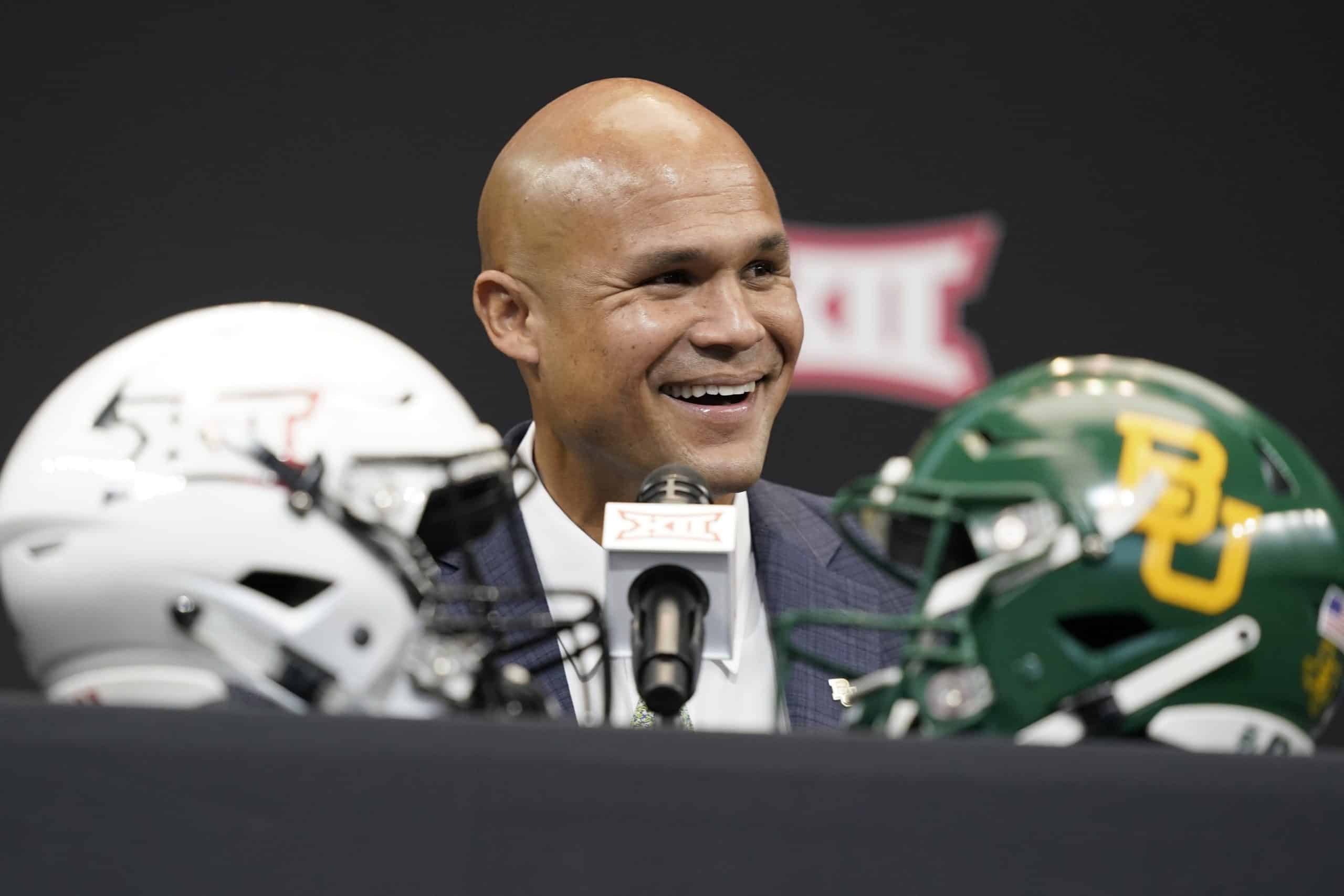 Baylor’s Dave Aranda says Big 12 offense is changing, but does that mean it’s more of the same?

Home » Baylor’s Dave Aranda says Big 12 offense is changing, but does that mean it’s more of the same? 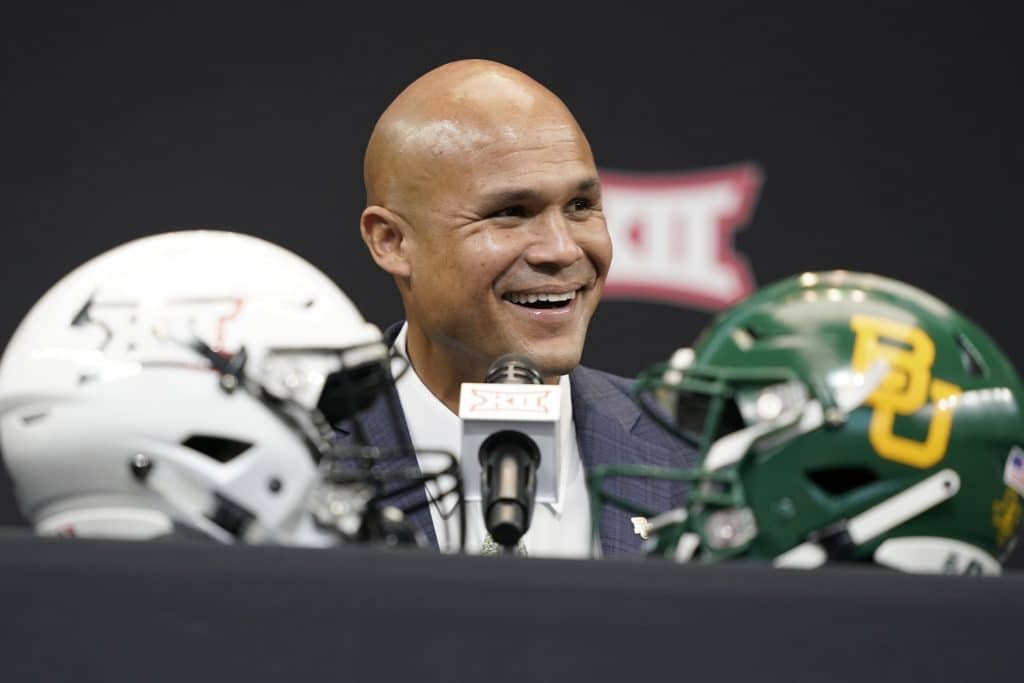 Baylor Coach Dave Aranda says that he will go from seeing the same offense every week, to something a little “different” from week to week (The Associated Press/LM Otero).

ARLINGTON — The first of two sessions at the annual Big 12 media days kicked off Wednesday, and there was a lot of action.

There were sponsorships, college playoff representatives, and a variety of media members spanning across just about all mediums and platforms.

However, for me it was one conversation in particular I enjoyed most.

As Aranda walked over to his next sit-down interview, he and I dived into his thoughts on the ever-evolving defensive structures and trends in the conference.  Aranda, a cerebral coach, is someone very intentional in all he does with his program. He is also a deep thinker when it comes to football, particularly the ebbs and flows of not just a single game, but from year to year.

Aranda talked during his press conference on how the Big 12 went from seeing the same offenses week in and week out to this upcoming season, where he anticipates having to face offenses that vary each week.

This idea intrigued me. As I thought about the new offensive coaches entering the league, I wondered, ‘Isn’t this just more of the same?’

The Air Raid coaching tree of Mike Leach and company.

Again, more of the same.

One could look at McGuire and contend that he is more of a defensive-minded coach. That is a fair point.

However, let’s take a look at who he hired as his offensive coordinator — Zach Kittley, a former Texas Tech student assistant and graduate assistant under Kliff Kingsbury.  West Virginia also hired a new offensive coordinator, a Texas native by the name of Graham Harrell. He’s no stranger to the Big 12 and its traditional offensive style.

The list goes on. Jeff Lebby, the new OC for Oklahoma, is an Art Briles disciple. Kasey Dunn, the longest-tenured coach on Mike Gundy’s staff, is the offensive coordinator the Cowboys and certainly is a Big 12 “type” of offensive coach.

The rest of the conference’s offensive coaches have remained intact, aside from Collin Klein adding the offensive coordinator tag to his quarterback coaching duties at Kansas State. Of course, he is someone who starred for the Wildcats in … the Big 12.

At first glance, this seems to be back to the Ol’ Big 12 offensive look for a lot of teams.

So coach Aranda, how is that different?

“I think we are both saying the same thing,” he said. “When most folks think of Big 12 traditional offenses — maybe spread offenses, throwing it, tempo-ing it — and maybe not a lot of defense.”

He went on to talk about how defenses in the Big 12 responded to the spread offenses, or “10 personnel” sets, by using lots of stunts and movement up front, linebackers plugging, five safeties on the field at one time, and various pressures.

All of this led to the proverbial chess match between offensive sets and their personnel and defensive structure.

One offensive answer to all of this defensive noise was to bring in more tight ends. This had quite the domino effect for defenses. These 12 and 13 offensive sets, along with “wing sets,” or a tight end with another player usually lined up 1-by-1 yards off of the tight end, really strain a three-man defensive front, especially one with extra defensive backs on the field.

These tight offensive sets create what is known as a three- or four-man surface. This refers to the number of men to the right or left of the center. The number of players on the line of scrimmage certainly impacts a defense, however, the increase in the number of gaps the defense needs to defend in order to stay sound is more critical.

The odd-front defenses or three-man fronts with extra defensive backs to match the speed of the 10 personnel offenses were immediately negated by the multiple tight end/H-back sets that Iowa State introduced, followed by Oklahoma, Kansas State, Kansas, Baylor and others in the Big 12.

The reason for this is usually on the weak side of an odd defense. The outside linebacker plays in “space” at linebacker depth and has the ability to cover the flat, therefore freeing up a safety to hang back in coverage.

The minute you create a three- or four-man surface, that outside linebacker has to be on the line and thus the safety needs to come down to play at 8 yards or less, usually in a more “flat-footed” position. This makes the defense much more susceptible to the play-action pass. This domino effect also limits the number of stunts you can run by declaring who is a “rush” player and who is not pre-snap.

All of this means that Aranda’s point, the one that he drove home in his press conference about facing “different” offenses each week, simply means that the league is starting to come full circle by infusing more spread 10 personnel offenses into the league. That is viewed as a traditional Big 12 offense.

Aranda, who is a brilliant defensive mind, sees that “more of the same” is actually going to make things very different.