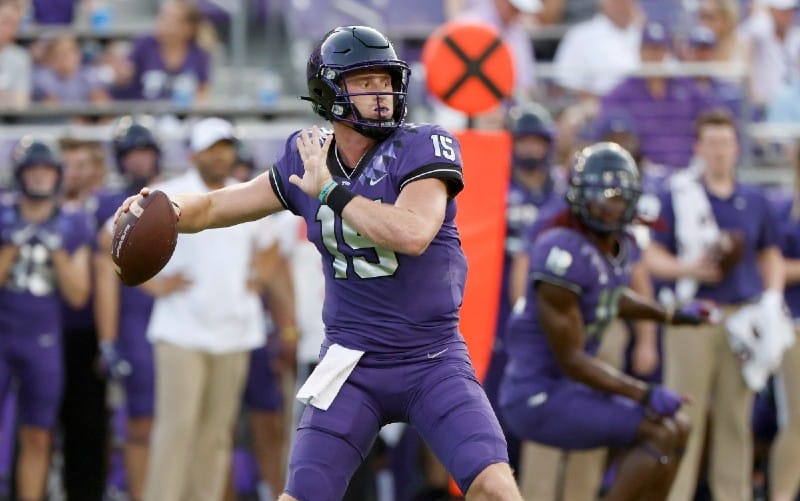 He didn’t just hand the ball off. Ballard threw for 4,204 yards in his career, all but nine of them coming in 2005 and 2006. He has two of highest single-game completion percentages in program history and the lowest interception percentage in his career.

As was seemingly required of all TCU quarterbacks under offensive coordinator Mike Schultz, Ballard could run just enough to keep defenses honest. In addition to 26 career TD passes, Ballard rushed for 16 scores.

Berry’s four seasons at TCU (1946-1949) weren’t marked by high win totals, but Berry established himself as one of the top passers in the Southwest Conference and as one of the best all-around players in program history.

Berry, who came to Fort Worth from Wichita Falls High, led the Frogs in passing his final three seasons. That included a conference-leading 1,445 yards in 1949, his only winning season (6-3-1). He was selected as an All-American.

He led TCU in rushing in 1946 and 1948, when he led the SWC, and his 4,063 career all-purpose yards were a school record for more than 30 years and still rank seventh in school history.

This one is ongoing, as Duggan still has a season remaining, but he has been an electric player in his first three seasons at TCU with his arm and his legs during a strange time in program history.

He’s tough, too, having played with a broken finger as a freshman and a broken foot as a junior. He also had heart surgery before his sophomore season but missed only half of the season-opening game.

Duggan’s sophomore season was played during the COVID-19 pandemic. His junior season saw the dismissal of coaching icon Gary Patterson. Yet, Duggan persevered to lead the Frogs in passing each of his first three seasons and in rushing in his second season. He also had TD runs of 81, 58, 48, 46, 42 and a non-scoring run of 62 yards.

Printers was more than just the guy who handed off to LaDainian Tomlinson in 1999.

Printers led TCU in passing in three straight seasons, 1999 to 2001, and in 1999 was the quarterback for TCU’s first conference outright championship since 1958. He was under center when TCU shared the Western Athletic Conference championship in 2000.

TCU went to three straight bowl games under Printers, who is eighth all time in passing yards (4,621) and passing touchdowns (37).

A three-year starter under coach Pat Sullivan from 1993 to 1995, Knake established multiple program firsts for a quarterback.

Knake took TCU to its first bowl game (Independence) in 1994 in 10 years and a share of their first conference title since 1959. He threw for a school-record 24 TDs that season, the first time a Frogs QB had ever eclipsed 20.

Knake finished four seasons with a school-record 7,370 yards that stood until Andy Dalton junior season. His 49 TDs passes were also a school record until Dalton came along. Knake still ranks third all time in passing yards and touchdowns.

Following Trevone Boykin was a tough act to follow, but Hill was up to the task.

Only one TCU quarterback, Boykin, has thrown for more yards in two seasons than Hill did in 2016 and 2017 after transferring from Texas A&M. Hill threw for 3,208 yards in 2016 and 3,152 more in 2017 to take TCU to back-to-back bowl appearances, and is fourth on the all-time yards list despite playing only two seasons.

Hill’s best season was 2017, when he led the Frogs to the Big 12 Championship game and a thrilling comeback win over Stanford in the Alamo Bowl. Hill became a graduate assistant on Gary Patterson’s staff in 2019, an offensive analyst in 2020 and quarterbacks coach in 2021.

The all-time leader in passing yards (10,728) and TD passes (86) was the beneficiary of Gary Patterson hiring Doug Meacham and Sonny Cumbie as co-offensive coordinators before the 2014 season.

A more wide-open attack benefited Boykin, who proved to be a prolific passer who was also a threat on the ground. He had an array of playmakers around him, including receivers Josh Doctson and KaVontae Turpin and running back Aaron Green.

Boykin finished fourth in Heisman Trophy balloting in 2014 after throwing for 3,901 yards and 33 touchdowns. He also rushed for 707 yards and nine TDs and caught a TD pass. Boykin threw for 3,575 yards and 31 TDs as a senior.

No quarterback in school history won more games than Dalton, who started as a redshirt freshman and whose final game was a 21-19 victory in the 2011 Rose Bowl. He is one of two QBs in TCU history to lead the team in passing four straight seasons (also David Rascoe, 1985-88).

Dalton left school for the NFL as the all-time leader in most major passing statistics and also rushed for 1,611 yards and 22 TDs, but was edged in most by Trevone Boykin (2012-15). However, Dalton-led teams from 2007 to 2010 won 42 games and lost only seven times.

The only Heisman Trophy winner in program history, in 1938, O’Brien led TCU to its second national championship. He led the Frogs in rushing yards and passing yards in 1937 and 1938, including a school-record 1,457 through the air in 1938.

Little Davey was only 5-foot-7 and 150 pounds, but the Dallas native did everything for the Frogs. In addition to rushing and passing, O’Brien punted, kicked, returned kicks and played in the secondary.

He’s still a known commodity in the modern game. Each year the top quarterback in the nation received the Davey O’Brien Award.

If not for the stubbornness of Texas baseball coach Billy Disch, Baugh might be considered the greatest Longhorns quarterback. Alas, Disch didn’t want Baugh, a strong-armed third baseman, to play baseball, but TCU baseball coach Dutch Meyer was more than glad to have him.

Meyer was also the freshman football coach in 1933 and became the head coach in 1934, when he implemented his double-wing offense with the perfect quarterback leading it.

Slingin’ Sammy guided the Frogs to the 1935 national championship, the first in school history. The second followed three years later under Davey O’Brien, but no one had thrown the ball quite like Baugh.

“Mr. Slingin’ Samuel Baugh can chunk that cabbage,” Rice wrote in 1935 in the New York Sun. “He could murder a fly on a fence with the snout of that missile at any distrance from a yard to at least 50.”

Baugh led TCU in passing from 1934 to 1936, including the first two 1,000-yard seasons in program history. He is a member of the College Football and Pro Football Hall of Fames.

FORT WORTH — Gary Patterson was a defensive coordinator before he ever became TCU’s head coach, and he was heavily involved in the defense after replacing Dennis Franchione late in the 2000 season.

The numbers produced by the Horned Frogs’ defenses over the ensuing 20 seasons, not to mention the many players who have continued to the NFL, have given TCU a reputation for cranking out star defenders.

However, TCU’s success in the Patterson Era relied largely on heady quarterbacks who managed ballgames and could outright win them with their arms and, in some instances, their legs.

TCU football, though, didn’t begin with Patterson. The modern passing game, though, did start at TCU … in the 1930s.

That’s how far back as Frogs Today had to go to search for the top 10 quarterbacks in TCU history. Our list recognizes Sam Baugh and Davey O’Brien as quarterbacks, even though they technically were tailbacks in Dutch Meyer’s double-wing offense that was a spread formation.

This exercise wasn’t as simple as going to the football media guide and ranking QBs on their all-time passing totals. Not everyone is going to agree, and that won’t hurt our feelings one bit.

Disagree? Let us know in the comments sections, keeping in mind that this is a family website.